Victor Kessler Hasn't Said It All 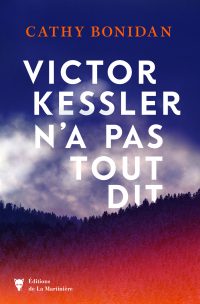 Victor Kessler Hasn't Said It All

“A true love-at-first-read!”,  “A thrilling novel”,  “She’s an author that I particularly like because she interweaves different characters’ stories, secrets, and people’s personalities.”- Pierre-Yves Dodat, Télématin, 26/07/2020

”After the success of The Perfume of the Hellebore Rose, the author continues to surprise in this striking novel filled with realism. A gripping story.”— Télé 7 jours

”Cathy Bonidan’s Victor Kessler Hasn’t Said It All is one of the “3 page-turners of the summer” —Pierre-Yves Dodat columnist and bookseller (Mille paresses bookstore, Le Pradet)

”Victor Kessler Hasn’t Said It All, released on June 11, is once again a gem.” — La Provence

”The mystery gets thicker in the mystery, the suspense takes shape, served by the provincial atmosphere of a town lost in the Vosges and the epistolary form of the novel that makes us skillfully switch from the past to the present, and vice versa. In short, we devour this book.”— La Voix du Nord

”Through a simple and engaging writing, we follow the journey of these two characters who were in no way fated to meet each other.” — Brigitte, Librairie Hall du livre (Nancy)

”Through the dense fog and the Vosgean forests, Cathy Bonidan takes us into this novel, darker than her previous ones but equally captivating, through the investigation of Bertille, an ordinary and endearing heroine, to whom we wish to find at last peace and joy.”— Justine, Librairie Cheminant (Vannes)

Bertille leads a sadly ordinary life. Employed in a polling institute, she conducts surveys of little interest in supermarkets. Until this one Sunday morning, when her existence changes forever.

She approaches a client, an old man, who is carrying around a shopping bag and a piece of hand luggage, and serves him her usual verse: “Sir, it’s for a survey…” But as he listens to these words, the old man faints. While he is taken to the hospital, Bertille retrieves his belongings, including the strange shopping bag. She gets curious and allows herself to search it. In its lining, she discovers about fifty scribbled pages. It is a handwritten confession of a man, Victor Kessler, who was involved in a child’s death by drowning in the 1970s. A man who has spent thirty years in prison but has never claimed his innocence, never defended himself against the charges.

Bertille is stunned. Especially since this affair, which occurred in the Vosges area just a few years before the murder of little Grégory and which has had the entire country in its grip to this day, presents disturbing echoes with her own past. She decides on a whim to go to the scene of the disappearance to conduct her own investigation. What she discovers will awaken many secrets that have been asleep for more than forty years and upset the course of many lives. Bertille should have known: not all truths are always good to unearth.

After publishing a debut novel that was praised by 11 literary prizes, and a second novel whose rights were sold to 7 countries, Cathy Bonidan truly imposes her talent with this new title.

Reminiscent of best-selling authors Joël Dicker, Guillaume Musso or Michel Bussi, she has written a novel with relentless suspense in which intrigue and characters intersect until the very last plot twist. Vanished children and family secrets, lies and truths turn this book, set for a large part in the French Vosges forests, into an addictive page-turner.