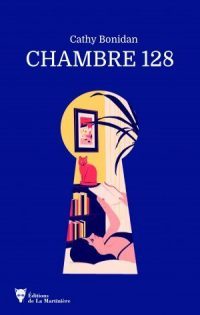 “When I read the description of this wonderful novel I was immediately intrigued. And then when I started turning the pages I couldn’t stop. This was such a touching, heartwarming novel […]. I found myself loving and rooting for these wonderful characters from beginning to end, particularly Maggy, who learned so much about herself and how to love again during the course of the book.” — Laura Apperson, Associate Editor, St Martin’s Press

The author of The Perfume of the Hellebore Rose comes back with a second novel, confirming her talent as a writer in the tradition of Katherine Pancol and Anna Gavalda. In the style of The Guernsey Literary and Potato Peel Pie Society, this epistolary novel, populated by incredibly endearing characters, shows how reading a book can lead to life-changing revelations about ourselves.

In room 128 of the Beau Rivage hotel, on the Brittany coast, Anne-Lise discovers a manuscript. Inside, there is an address. Like a bottle in the sea, she forwards this manuscript on to the one who might be its owner. But not before having read it… and oh, how touching the manuscript turns out to be! To her great surprise, Sylvestre, the author in question, answers to her message. The first reason is that he lost this manuscript in a France-Canada flight thirty-three years ago. And then, well, because the second part of the manuscript she sent him has not in fact been written by him…

Sylvestre wishes only for peace and oblivion; however, to his great dismay Anne-Lise decides to conduct an investigation. And in doing so, she will reconstruct the path of this manuscript that changed the lives of all those who had it in their hands. Through the letters exchanged by the characters, friendships are created, romance is born and tensions sometimes burst. Up until the final revelation: the secret behind the manuscript.

Cathy Bonidan works as a teacher in Vannes and has been writing since the age of 14. It was through her desire to share what she was writing on a platform of independent authors that she has been spotted: she received her first literary prize and met the one who would become her publisher. An ironic plot twist for an author who wanted to remain anonymous!