The Perfume of the Hellebore Rose

The Perfume of the Hellebore Rose

I was delighted with this reading. The writing is elegant, the description of the feelings striking. (…) This novel is very beautiful, touching. A beautiful tribute to differences, whether physical or mental. — Cultura Brive

A magnificent novel, which I have devoured! A lot of sensitivity in the writing, characters portrayed with great accuracy, two stories that intermingle harmoniously – the past and the present – emotion, love … All the ingredients are gathered in this luminous novel! — Editorial Director, France Loisirs

A fictional novel pushing back the barriers of ignorance; imaginary characters quoting recognized psychiatrists or psychologists, pointing a finger at these “exceptional beings who have preceded history”. — Froggy’s Delight

In this luminous novel, full of hope, the destinies of the characters will cross, between lightness and melancholy. — Paperblog

The subtle and solar perfume of this novel captivates for a long time. – Notre Temps

Like The Greenhouse, a touching and sensitive debut novel that highlights how listening, sharing and friendship are the only values that can save people’s lives.

Anne had been sent to Paris to work in the psychiatric center directed by her uncle. In the early sixties, treatments were still in their emergent stages. Anne observes the strange behaviour of a young boy of eleven, Gilles, who everyone nicknames “the idiot.” She sends her thoughts to her best friend in secret letters. Why is their correspondence forbidden? And why was Anne forced to move away from her family?

At the center, she meets a young anorexic girl, Beatrice, with whom she builds a friendship. Together, they see what no one seems to have noticed: when he is with the hospital gardener, Gilles, who is actually autistic, stops suffering crises. He even says his first words. But the psychiatric world would have it differently. 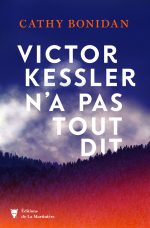