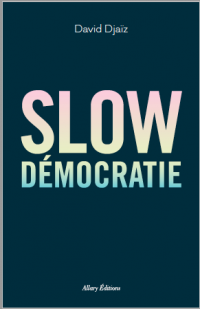 Netherlands (Uitgeverij Pluim, in a pre-empt) 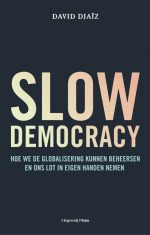 An important, intelligent and inspiring book about one of the most important subjects of the coming decennium: how do we regain control over capitalism? —Mizzi van der Pluijm,Uitgeverij Pluim

Neither populist nor eurosceptic, David Djaïz shows that the national level remains indispensable when thinking about solidarity, ecology and progress. — Laurent Joffrin, Libération

Evoking history, literature, economics and philosophy with virtuosity, one is reminded of the protective virtues of an inclusive nation. — Le Point

Slow Democracy invites us to regain control of an ”unrestrained globalization. — Le Monde

A detailed description of globalization and its consequences stands out in his work. —Le Figaro Magazine – Alexandre Devecchio

David Djaïz is a senior civil servant, not yet in his thirties and already full of ideas to give meaning and substance to the democratic debate. — FranceInfo – Patrice Romedenne

Founded on sovereign nations, Slow Democracy represents the only viable future for our Western democracies.

In response to unbridled globalization, which is undermining national sovereignty in many countries and which promotes the rise of populism, it is high time to apply the brakes. Western democracies need to regain control of their own fates, and there is only one tool that will allow them to do that: nations. Not the ones loved by nationalists and anti-Europeans. The ones that will allow us to rebuild lost our political, social, and territorial unity. Open, social, ecological and humanist nations.

And we need to act fast, because the far right is coming to power in countries around the globe, and it appeals to young voters. To parry the rise of populisms, we can no longer settle for wishful thinking about standing together against fascism, or makeshift solutions doled out by governments to extinguish outbursts. Liberal democracy, which we thought was too deeply entrenched to be uprooted, is in fact at death’s door. And if nothing changes, the voting booths will sound its death knell.

So Slow Democracy, founded on sovereign nations, represents the only viable future for our western democracies. Social-democrats, ecologists, and progressives shouldn’t be afraid to claim it as their own. The nation is a forward-thinking project. It is becoming more and more urgent to wrest it back from the hands of the pyromaniacs who are instrumentalizing it for their racist, nationalistic ambitions.