The House on the River Bank. The Saga of the Casadio Family 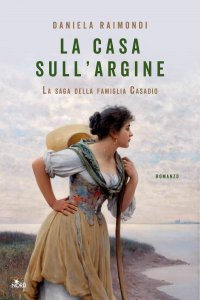 The House on the River Bank. The Saga of the Casadio Family

“The house on the river bank is a vital and poetic novel full of passion. Thanks to a chorus of authentic and enthralling voices, it tells an unforgettable story.” — Stefania Auci

A woman jumps into the river Po and fights a giant sturgeon; a man with a passion for Opera baptises all his children with the names of the Bel Canto’s heroes; another man threatens every day to hang himself from the persimmon tree behind his house; an old woman plays cards with an uncle who died two centuries before; a gypsy cures insomniacs with lettuce leaves; a centenarian lady is buried sitting upright in a chair; a little boy chatters with his dead father, and a little girl announces the Bingo numbers before they are taken out of the bag. These are the characters of the novel: a family saga surrounded by magic, and where personal events are described against the backdrop of Italian history.

The story is set mainly in the small village of Stellata, a hamlet half forgotten by the world sitting on the shore of the river Po. It begins by describing the life of Giacomo Pollastri, a melancholic and shy man who lived at the end of the XVIIIth Century. In spite of his timid temperament and the fact that he was: “marked by sadness since the time he was in his mother’s womb”, Giacomo has an entrepreneurial spirit and dreams of building an ark just like Noah’s: a ship able to transport animals and people along the Po. He spends most of his life building ark after ark, but all his attempts fail miserably, each boat sinking soon after its launch.

Still a virgin in his forties, Giacomo “bastardised the family” by marrying a gypsy named Viollca. From this union, all the descendants of the Pollastri family are split in two: some born with the blue eyes and the dreamy temperament of their father Giacomo, the other half endowed with the same wild black eyes of Viollca: people with a practical sense but with less imagination, and with the gift of foreseeing the future.

The progenitor of this mixing of blood is Dollaro, Viollca and Giacomo’s only son. From the moment of his birth, he is a very special child: “Still covered in blood, the new-born opened his eyes and gazed around with an inquisitive look that scared the midwife.”

As he grows up, Dollaro develops the gift of finding objects that people have lost. He also spends his time in the cemetery, chatting cheerfully with the spirit of a little girl, or listening to the frightening screams of the dead, until he convinces himself that “all those who feel sad in their lives continue to feel sad after their death.”

When Dollaro is still a child, his father hangs himself from a beam in his bedroom. At that point Viollca, fearing her own child may have inherited Giacomo’s predisposition for melancholia and suicide, interrogates her tarots to discover what the future holds. The cards reveal the details of a terrible tragedy which will eventually befall the family. The final card of the tarot shocks her, for it is the Devil. On it, a man and a woman are naked and chained to the central image of Satan. In the centre of his belly, there is a small, human face, which Viollca imagines to be a foetus, or a new born child. Viollca foresees a disastrous marriage in the family’s future, a union which would bring about much sorrow and the death of a baby.

Viollca is determined to do everything in her power to avoid the tragedy. She is convinced that all the family’s misfortunes are born out of their weakness for chasing impossible dreams, just as happened to her husband Giacomo, with his mad passion for building ark after ark. The gypsy passes on these fears to her son Dollaro and, through him, to all her descendants. For many generations, Viollca’s prophecy will loom over the characters of this story, many of whom will resist the temptation to follow their dreams.

The personal destinies of the novel’s main characters, mingle with the major events of Italian history, starting with the struggle for the unification of Italy, and continuing to the 20th century, with the wave of emigration to America, the life in the African colonies during Fascism, the two World Wars, the liberation from dictatorship, the economic boom of the 60s and the wave of terrorism that hit Italy in the 70s.

It is in this last decade that the terrible prophecy Viollca read in the tarots almost two centuries earlier, will reach its culmination.

In the epilogue, which bears the date of October 2013, a box of old photographs belonging to the family and found by Norma, the alter ego of the author, closes the novel, reminding her that:

“Many of them have black eyes and the same, wild look of their gypsy ancestor; others have blue eyes and the unmistakable gaze that characterised the dreamers. But in all of them I see the same story: a story tied to the earth… For many generations we did our best to give up our dreams of love, of music, the intimate joy of creativity and imagination. But there was no need to resort to an ancient tale of gypsies and beheaded snakes, to understand that the ancient prophecy read in a pack of tarots had been misunderstood. Because happiness is made of the same substance of dreams and the sorrow we have all endured in life, was not caused by our pursuit of dreams, but by giving them up.”