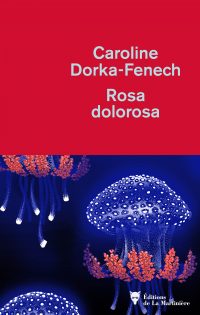 ”Reading Rosa Dolorosa has been a revelation to me.” — Amélie Nothomb in Point de Vue Magazine

”A debut novel with terrifying mechanics, in which the duel of infinite maternal love and implacable truth is engaged.” — Livres Hebdo

“Rosa Dolorosa is one of those novels that leave you breathless, and that you read in one sitting. With its lively and edgy writing, it moves the reader by its accuracy in the emotions and strength that are embodied in this mother-wolf, who will do anything to save her child” — Catherine Dieumegard, Librarian at “La Librairie L’Arbre à mots” (Rochefort)

“Ready to do anything to defend her child, this great heroine is irresistible! A hard-hitting and poetic style: we are excited! “— Psychologies Magazine

”If a successful debut novel had a pattern, it probably would be this one.” — Pleine Vie

A magnetic, dark and radiant debut novel, whose heroine recalls John Cassavetes’ Gloria and Pasolini’s Mamma Roma. Filled with organic, carnal, and poetic images, this book retraces the journey of a mater dolorosa who is on a haunting and devouring quest to prove the innocence of her son.

In Nice, Rosa Messina and her son Lino dream of owning a hotel. She was only 19 when she had him, and they are inseparable. Until, one day, the police comes knocking on their door. Lino is arrested for murder.

In the dark alleys of Nice, Rosa struggles to find clues to prove the innocence of her son. But in this quest that obsesses her, devours her, she starts having intense pain in her legs. Would these wounds be a sign of what she doesn’t want to see? And if Lino is guilty, does her dedication make her a foul, immoral, revolting mother? How far can a mother’s love go?

An implacable plot unfolds through concise, sharp-edged dialogues and written in a language bathed in organic and sensual images. Its complex and paradoxical characters are caught in a net of desire and guilt like dying, sinuous electric jellyfish, and will not be able to escape their tragic fate.