A lively and exciting plot, I loved it! – Andrée, la papivore.com

The whole thing is carried out with a beating drum and not for one second are we bored. – Glazmag.com

A brilliant historical novel telling the story of Loulou Chandeleur, a private detective who disguises himself as a woman to avoid fighting in the war of 1914. An authentic insight into the difficult atmosphere of war and denunciation.

The war of 1914 is just starting. To escape the draft, police inspector Ray Février decides to dress up as a woman. He becomes Loulou Chandeleur, a private detective in silk stockings and a veiled hat. He discovers that he is just as good a detective in a dress as he is in trousers and perhaps a better man. His first client, the wealthy Baroness Schlésinger, is being blackmailed in an unusual way: someone is threatening to kill her corporal son in a Verdun trench if she doesn’t hand over a large sum of money. To prove that the peril is serious, the blackmailer threatens to start by killing random people first. Ray/Loulou is helped out by Leonie, a singer-prostitute friend, and the head of the detective agency, Miss Barnett, who quickly falls in love with the woman he is not.

For the four years of the war, the women of France kept the country alive. This novel tells the story of a man who discovers a world of women. A book on the difficulty of being a woman – especially when you are a man.

Frédéric Lenormand is known for his Voltaire series which were published by Lattès and New Investigations of Juge Ti (Les Nouvelles Enquêtes du juge Ti, Fayard/Points). 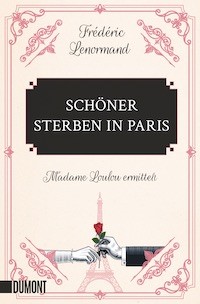