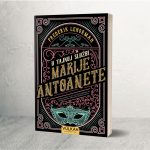 As usual, his style of rare elegance provides a sparkling investigation, a gem of lightness shimmering with humor. Behind a delightful story with multiple twists lies a vibrant description of the halls of Versailles… Do not pass over this delicious mystery novel which is to be savored! —Gérard Collard, La Griffe Noire

A gem of a detective story! […] It’s light-hearted, funny, and devilishly well-plotted. Let yourself get carried away by these very special agents in Her Majesty’s service. They’re worth it. — Historia

A novel with surprising plot twists, a dash of style, a tasty dose of humor, and a well-constructed plot: who could ask for anything more? — Cosmopolitan

I was over the moon about this novel. […] I can’t recommend In Marie- Antoinette’s Secret Service highly enough. […] The atmosphere is similar to an M. C. Beaton book […]. — @mademoisellemaeve

As a fan of detective comedies, I found Frédéric Lenormand’s book irresistible. […] I raced through it in less than two days!” —@aufildespages

I loved it! […] It’s like a cross between a cozy mystery, a comedy, and a historical detective story. The dialogues are side-splittingly funny. Funny, sassy, smart, or lucky, the characters are a real delight. I want another Rose and Léonard mystery! — @lesdemoisellesdechatillon

‘The Queen is in Quarantine!’ is a real treat to read. — Gérard Collard, Le Mag’ de la santé, France 5

Frédéric Lenormand sprinkles his genuine historical intrigues with delicious humour. Reading the pages is like tucking into sweets: a true pleasure — L’Indépendant

The brand-new series In Marie-Antoinette’s Secret Service offers a delightful tour through the Palace of Versailles’s many secret passages and tunnels. From behind her fan and ribbons, the Queen keeps a keen eye on everything that’s going on at Court. With the help of a picturesque pair of sleuths, a jewelry heist will be her first case. This droll, light-hearted novel introduces us to a cunning and manipulative Marie-Antoinette through a truculent detective story.

Recently wed to Louis XVI, Marie-Antoinette is soon bored by her new role. Balls and finery aren’t enough to entertain her. An antique jewelry theft will offer her a chance to develop new skills, this time as a detective. For the sake of her mission, she assigns Rose, a milliner, and Léonard, a hairdresser, the role of spies. The only problem is that Rose and Léonard can’t stand each other. Rose is compulsively neat and orderly; Léonard, a party animal. The only words they ever trade are insults. But they’re going to have to learn to get along if they want to earn a spot in Court. Their investigation begins in town, where two murdered bodies have just been found. Are the murders connected to the jewelry heist? Will the two servants manage to curry favor with the Queen by finding the treasure? Hidden by her fan and her towering hair-dos, Marie-Antoinette will take on an entirely different role than the one assigned to her!

A new investigation in the “In Marie-Antoinette’s Secret Service” series, featuring Rose and Léonard, a pair of amateur sleuths who are as clumsy as they are endearing. New facets of Marie-Antoinette are revealed: gambling, manipulation… The Queen still has plenty of surprises up her sleeve!

Upon the death of Louis XV, France – and Marie-Antoinette – get a new king. Locked into her new status as queen, and condemned to share her life with a man she doesn’t love, Marie-Antoinette is profoundly bored. Then the country suffers a terrible famine and the masses are demonstrating at the gates to the castle!

When Rose, a milliner who’s always armed with her thimble and her silk ribbons, and Léonard, a hairdresser who has no equal with scissors and curls, happen to win an Aztec statuette in a prize draw, Marie-Antoinette realizes that it’s the solution to all her problems. She wants to end the famine, and, while she’s at it, entertain herself by playing detective. Obliged to act secretly because she’s under constant surveillance by the King’s men, she assigns Rose and Léonard the task of finding the rest of the treasure. But the milliner and the hair-dresser soon run up against a strange curse: everyone who had the treasure in their hands has been found dead with a Spanish doubloon in their mouths.

Squabbles, jealousy and manipulation are on the menu for this delightfully ludicrous and entertaining investigation.

Marie-Antoinette is the undisputed Queen of detective comedy! More rebellious than ever, she sends her duo of infernal investigators – her milliner, Rose, and her hairdresser, Léonard – to investigate the disappearance of a secret code. Does it make sense to to entrust the security of the kingdom of France to a wannabe Sherlock and a Watson in petticoats? Of course, Lenormand takes advantage of this cheerfully madcap plot to plant real historical clues…

A secret code for contacting the kingdom’s spies has been stolen! It seems that the suspect made their escape all decked out in a bridal gown: one designed by Rose Bertin, no less! This new mission leads our duo of constantly squabbling, colorful cub detectives into a series of seam-splittingly funny adventures. From a perfume workshop to the royal indoor tennis court via the secret passageways of the Palace of Versailles, Rose and Léonard are really going to be put through the wringer. If they’re not careful, they could get caught up in the Revolution!

An entertaining gem of historical humor, for everyone who loves detective comedies!

Volume 4: The Woman with the Golden Pistol – October 2020

Queen Marie-Antoinette excels in the art of deception! At the head of a very secret royal service, she sends her irresistible duo of amateur investigators Rose and Léonard in the footsteps of a mysterious (and obviously rich) financier. This new cosy crime title is all about a golden pistol and charlatanisms, yet also about love… will Léonard finally succumb to Rose’s charms?

To be a queen does not only entail organizing parties to entertain the Court. It also imposes the duty of giving an heir to the kingdom of France! Potions, ointments and other charlatanisms: Marie-Antoinette has tried everything. As a last chance, she appeals to a magnetizer who is said to have the quick fix. But now the latter, on the verge of bankruptcy, is forced to leave the kingdom. To remedy this, the Queen is deploying a new plan: get the money where the funds are the fullest, that is to say with the farmer-generals who are responsible for collecting taxes.
Blissful coincidence: the widow of a farmer-general approaches her to ask for her help. Following her husband’s death, she is under attack from all sides: everyone is after her fortune… and her golden pistol! Rose and Léonard, faithful servants behind the scenes, are sent to help the widow in exchange for a juicy reward.

Our couple of incredible investigators will come across many adventures and gradually drop their masks. They will be helped by the attractive Axel de Fersen, favorite of the Queen, whom she intends to keep under her wing. While Rose still complains about her bulky sidekick, Léonard seems despite himself increasingly sensitive to the charms of the milliner. Will he admit this to her?

The iconic Marie-Antoinette has measles! Her Majesty is obliged to respect quarantine. But the kingdom is in danger. Someone has absconded with an important treaty about American independence that must be prevented from falling into the hands of France’s nemesis, England! Rose and Léonard are going to have to devote themselves to the Queen’s service once again for another irresistibly fun-and-feud-filled investigation. A delightful treat for these glum times!

Heads up, Versailles: Marie-Antoinette and Louis XVI have measles. Sheltering in place in the Trianon and obliged to respect royal distancing, they communicate as best they can: she, from her balcony; he, in his iconic gardens!

But an American emissary will disturb the royal spouses’ lockdown. As America’s War of Independence is raging, France has secretly agreed to assist the fledgling country against its own longtime enemy, England. But the young emissary has been accused of murdering one of his countrymen and pilfering a secret treaty. If the document falls into English hands, the Kingdom of France will be in hot water.

Summoned to help the Queen, Rose, and Léonard leap into a new investigation. Having trailed their suspect from the racetrack in Longchamp to a tea parlor in Palais Royal, they finally catch up with him at a vaudeville performance he’s attending with a lady friend. Rose, the milliner, recognizes the woman’s hat right away: it’s one of her own creations!

But the emissary in question turns out to be a friend of Léonard’s, and the hairdresser is determined to prove his innocence. Even the Queen is torn about the outcome of the investigation: the fate of her lover, the handsome Fersen, depends on it.

Is our duo of darling detectives on the verge of irrevocable differences? Will Rose have to get her hands on the missing documents and establish the truth all by herself?