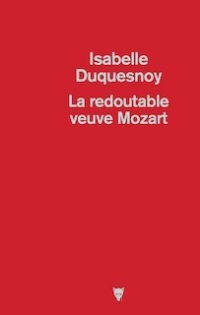 A novel … rich in the learnedness of its author, Isabelle Duquesnoy, which perfectly masters its subject. It may be fiction, but it’s also the result of phenomenal historical work. — Pascale Fauriaux, L’Echo Republicain

1791: Wolfgang Mozart dies at age 34. Overwhelmed by grief – as well as by debt – Constanze Mozart pulls herself together and decides to defend her late husband’s work for posterity. She proves herself to have an iron will; nothing will stop her quest for recognition and wealth.

To pay off her creditors, she starts out by selling Mozart’s compositions hastily. Then she requisitions one of his former pupils to finish his unfinished Requiem. She has her youngest son’s named changed to Wolfgang Mozart II, forcing him to perform concerts. The boy is not musically gifted, but she doesn’t care. His mother’s stubborn determination is painful for the child, who is obliged to embarrass himself repeatedly in public… And finally, for greater security, she takes a second husband: a Danish diplomat whose bed she never shares, but who could have gotten the death penalty for his sexual mores. During the 51 years that Constanze outlived the composer, she invented the intellectual- property system, founded a festival devoted to Mozart’s music, commissioned monuments to her late husband, and brought his music back into fashion. A portrait of a stunningly modern, larger-than-life heroine.

Isabelle Duquesnoy is an art restorer and a writer. She divides her time between Lower Normandy and Corsica. She is the author of L’Embaumeur (“The Embalmer,” La Martinière, 2017) and Confessions de Constance Mozart (Points). 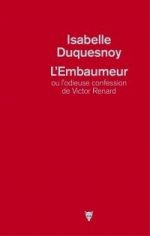