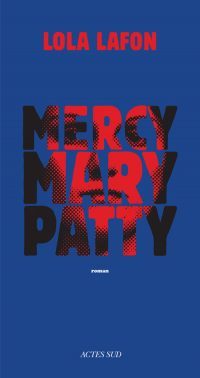 Recounted largely in the second person (unusual in French Letters, but a brilliant choice for her subject of the young mind; form meets function), Lafon’s “Mercy Mary Patty” is delivered with the same urgency as her songs. […] Lafon the novelist knows my country like Lafon the composer knew my soul. […] She nailed the epoch, by exhuming this traumatic chapter of American and specifically Northern California history to ponder the vulnerability of, influences on, and resilient power to resist and rebel of the teenaged mind. — Paul Ben Itzak

“Mercy, Mary, Patty” is not a simple, fictionalized biography…. Throughout the pages, “Mercy, Mary, Patty” goes beyond the sphere of criminal America to offer us a rich work, asking questions about political awareness as well as about the transmission of knowledge, the feminine condition, and the vampirisation of individuals by a mythology.” — Lire

Very much awaited since the huge success of “The Little Communist Who Never Smiled,” Lola Lafon does not disappoint. True to her ideas, she knows how to look inventive and subversive. Lola Lafon starts from a particular story to better reveal the whole world. Lola Lafon is a witch. Beware of her eyes.  — Transfuge

A work with a scalpel-like precision — JDD

Lola Lafon weaves a narrative canvas gracefully through the sensationalism of the case. It is not a question of attempting to rehabilitate the woman, but of exploring the paternalistic judgment that was attached to her — she was necessarily manipulated, this “poor child” or possessed by the devil — the anguish of a contagion. A symbol of a time when America feared her children more than her leaders. That seems so far away.  — Canard Enchaîné

A text on political radicalism and the gaze society directs at women who emancipate themselves. — Les Inrocks, 40 romans à la une

After the success of “The Little Communist Who Never Smiled,” Prix tdu roman Version Femina 2014, we waited impatiently for Lola Lafon’s new book. There was no disappointment with this fiction exploring the Patty Hearst affair, her virtuosity stunned us again. Fascinating, burning and brilliant. — Version Femina

We loved this book a lot. What’s great about the novel is that we’re simultaneously enthralled by the Hearst affair and by these two women. — François Clauss, Europe 1

Bit by bit, the relations of influence between the three women are made less clear and reveal the true stakes of the novel: to question the insidious abduction of the consciousness. The subtlety of Lola Lagon manages to delight the reader. — Elisabeth Philippe, L’Obs

In a fiction in perpetual metamorphosis, Lola Lagon reunites women who, one fateful day, turn their back on their routine and even their initial identities. All the female characters in this breathtaking book live off-balance, but they write their freedom, affirming it before their families who are thrown into a panic, their parents who refuse it, and a society shocked by such impudence. — Christine Ferniot, Télérama

A story of identity and liberty. Reflections on violence, escape, family. It is not about whether one agrees or not with a version of the story, but about continuous confrontation with the world. It is about heading down the path even when the way ahead seems foggy. — Marie-Laure Delorme, Revue des Deux Mondes

In the course of an interview which is so one-way as to feel like a trial, a voice addresses itself to Gene Neveva, an emeritus sociologist and star professor at the prestigious Smith College in Northampton, Massachusetts. For several weeks in 1975, Gene Neveva, who was then an English lecturer in the French provinces, immersed herself in the profusion of archives relating to the Patty Hearst affair in an attempt to bolster the defence of the young woman, who was accused of having espoused the cause of her kidnappers. To assist her in this painstaking archive research, Gene Neveva enlisted the services of her best student, the very discreet Violaine. For one of them it was a decisive encounter, and a quickly forgotten interlude for the other. Centred around a defining event of the age and three destinies which are ‘kidnapped’ by the attempt to grasp the enormity of its ramifications, Mercy, Mary, Patty is a novel of a rare intensity which examines the viral nature of transmission – the scandal and transgression of it all residing in the notion that to choose one’s path in life, one must jettison all one’s affiliations, and even one’s very identity. 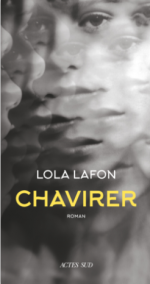