In the Big Washtub 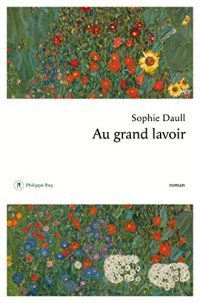 In the Big Washtub

After the success of Camille, I’ll Come Fly with You, Sophie Daull affirms her writing skills with a brilliant novel built around the ambiguities of the desire of forgiveness. Based on her own experience, In the Big Washtub deals with the story of her mother’s murderer.

A female writer is on a literary television show to promote her first novel. She can’t suspect that at the very same time her image on screen overwhelms a worker of the Nogent-le-Trou Park. Ex- convict for a crime he committed thirty years ago, now living an orderly life, he unexpectedly has to face his past, his choice and his mistake.

As a matter of fact, the novelist is the daughter of the woman he murdered. In five days, she will be signing her book at the town’s bookstore.

A countdown then starts for this solitary man, in a trivial and yet oppressive atmosphere, while he waits for the one-on-one encounter he dreads but won’t be able to avoid.

In this novel each character is on an intimate redeeming quest. Sophie Daull intervenes to assert the loyalty she has for the departed, flowers and district administrator’s offices.

« The guy who killed my mother lives somewhere on this planet. He can as well be a gardener in my novel. In his wheelbarrow is the soil for the bouquets of my resiliency. I give him my words, my love of flowers and my affection for the district administrator’s offices. For him, I made up a nice colleague and a cultured lover. I even gifted him a microwave. This is my life as a ventriloquist, my mouth in a parallel position, folded, unfolded, folded again, origami of doom, in which the cast, nice guys and bad guys, lost their way. »

Sophie Daull was born in the east of France. Actress, living in Montreuil, she published Camille, I’ll Come Fly with You, LIRE’s best first novel in 2015 (German (Goldmann), Dutch (Xander) and Polish (Czarna Owca) rights sold), and The Stitch in 2016.