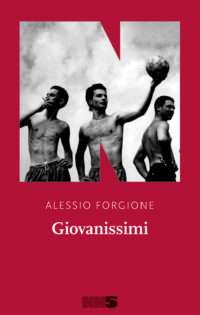 “Alessio Forgione’s new novel confirms how his raw, direct, livid writing, sentence after sentence, is the soul of a story on that ruthless shadow line, full of uncertainties, doubts, fears, dreams, will of greatness and sensational errors that define adolescence. Adolescence is the season of anger, pain, Marocco, the protagonist’s world is arid, like a wasteland, but yet illuminated by a light of devastating beauty: the Naples’ city lights which illuminate the road in the evening, traveled by kids full of dreams but already marked and ruined by reality.” — La Repubblica

“With “Giovanissimi”, Alessio Forgione takes a deadly jump in the adolescence of today’s generation of thirty years old. Through Marocco’s story, his teammates at Pro Calcio Napoli and his friends, the reader is gently thrown into a Naples that forces you to grow and often kills you even before you manage to do it. A bitter book, illuminated by the sparks of hope that only love could give. Forgione’s style is fluid and embracing, the reader is unexpectedly immersed in the pains, hopes and violence of these young lives, fooled by love or absence of love. His book reveals a pain that many wouldn’t want to face. His severe eyes narrate the facts, and we become children again in front of this story, and we get overwhelmed by it.” — Huffpost

“Giovanissimi is a novel “TRUTH”, which burns on every page, and takes us to a suburb that is still taboo for most of the inhabitants of Naples. There are places where their destinies are consumed, the teenagers of 1997, little more than children, who will fall, more or less, throughout the story, like bowling pins hit by a strike. There is so much emptiness and absense of love in this book, and it hurts. “Giovanissimi” is altogether love and emptiness. The boys we see in front of our eyes manage somehow to burn themselves for good.” — Identità Insorgenti

“The plot is exemplary, in all its particularity with which the imperfect friendship, the immature love, the surprising discovery of sex, are told. And this gives a confidential dimension that only novels destined to last have. To say that it’s excellent is, after all, an insufficient judgment for a novel that bleeds maturity. In Giovanissimi the author has shown, in fact, that he can do without the evolutionary stages for learning how to do this profession. He managed to gather them together, without skipping them. […] A book with a great character, which remains true to itself and simultaneously finds its own dimension and originality. […] I liked the delicacy with which the author balances the two main charcters: the 15-year-old Marocco, and Naples. Both, the boy and the city are equal actors, in a relationship of perfect exchange of power and influence. The suburbs, delinquent, violent, shameless and irreverent, compel Marocco, and he almost resembles them. Marocco, on the other hand, indolent and sometimes arrogant, influences the city, transferring his bad attitudes to it, because, after all, people make places. […] I liked the construction of the plot, in perfect line with adolescence: impetuous and reticent, constantly in tension. Alessio Forgione’s writing is dry, nitty and gritty, tough, but yet we can see a hint of a smile, a gentle ray of hope somewhere behaind everything.” — Lucia Libri

Fifteen year-old Marco Pane, known as Morocco because of his jet black, curly hair, is from the Soccavo district of Naples; he’s failing his exams but he’s a star player on the youth football team. Morocco lives with his father, his mother abandoned them years ago without leaving a trace or any contact details. The father may have erased any sign of the woman from his home, but the boy still dreams about her, tries to preserve her memory, and loves her desperately.

Morocco spends his time between football training and school, between away fixtures and afternoons in the neighbourhood, or at home reading Dylan Dog. This is a world where kids grow up on their own, where desires for greatness and sudden disappointments are set against a background of petty crime and serious violence. Morocco teams up with his friend Lunno, a more manly, silent type who does not go to school, and the two start dealing weed so that they can buy a scooter. When Serena comes into his life, Morocco finds love, which manages to calm his anger and opens the door to a different world and a different Naples, a place that feels less oppressive and frozen. But then one of Morocco’s teammates joins a gang of burglars, and when he is caught by the police he throws himself out of a window: a tragedy that is perhaps the sign of an inevitable destiny.

Following his debut Napoli mon amour, Alessio Forgione returns with a novel about first times, a coming of age story where mistakes and ambitions open up the path from youth to adulthood. 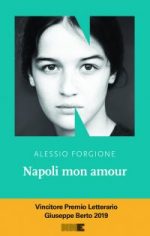