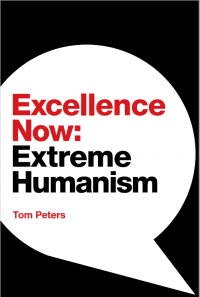 Be Kind.
Be Caring.
Be Patient.
Be Forgiving.
Be Positive.
Walk in the Other Person’s Shoes.

A sequel to the international bestselling title In Search of Excellence (1982) which Tom Peters co-authored, his newest book declares a path forward amidst the chaos.

At a time of profound dislocation, when hatred, violence, and structural racism have been laid bare by the murder of George Floyd, inciting protests across the world, and the global economy and untold individual lives has been ravaged by the COVID-19 pandemic, it is hard to imagine a better moment for Tom Peters’ new book, and his legendarily loud voice, to enter the public fray with singular clarity and words intended to shock us back to our senses.

Excellence Now: Extreme Humanism , Tom’s newest, and by his own admonition, “last book”, his “Summa” (Latin for total) delivers not so much a solution as a shot across the bow to leaders at every level everywhere.

Excellence Now: Extreme Humanism is wholly pragmatic wisdom that too many in power seem blind to…

Its pragmatism is pointedly aimed at the leaders who are making decisions right now, and those emerging leaders who are ready to boldly make decisions for themselves because there’s no time to wait. Ten topics come with 75 “To-Dos” challenging each of us to get going.

Amidst this moment of historic breakdown, tough week after tough week, the book is filled with a singular point of view, much of it harvested and quoted directly from a diverse group of brilliant global luminaries Tom has studied intently, and whose words he’s absorbed and spent the better part of a lifetime amplifying, weaving a grand call to action that can be summarized this quote from Hugh MacLeod of Gapingvoid that is the epigraph for the book:

This book’s timing is bizarrely uncanny. In Tom’s own words,

“While editing the first ten pages, I realized that the 43 years since our 1st book research started were 43 years waiting for this moment. The stuff I’ve been shouting about has moved from “damn good business strategy” to “undeniable necessity” in the face of triple madness—COVID-19, racial injustice, artificial intelligence at the tipping point.”

Only a few authors break through to become global phenomenon, defining whole domains… such as Civil Rights (Richard Wright) counter culture (Stewart Brand), mourning (Elizabeth Kubler Ross), sustainability (Frances Moore Lappe). When Tom Peters and Bob Waterman wrote In Search of Excellence in 1982, they set the business world on fire and defined business for our era with topics that included (and this was in 1982!) Managing Ambiguity and Paradox, A Bias for Action, Close to the Customer, Autonomy and Entrepreneurship, Hands On Values Driven, Simple Form, Lean Staff and Productivity through People. This was not the 1982 norm. And, alas, it is not the 2020 norm, which is why Tom keeps pounding and pounding and pounding some more on these key ideas.

The first book was named one of “Top Three Business Books of the Century” by National Public Radio/1999, and the “Greatest business book of all time” by UK’s Bloomsbury Publishing.

Tom could have rested on his laurels. But instead he was determined to push his main message with all the energy he could muster—which has meant, among other things, 18 more books, over 2,500 speeches in 63 countries, thousands of articles, hundreds of podcasts, shouted, written, tweeted, ranted, spoken from the heart later, Tom Peters cannot be quiet.

He has and is a voice for our times. When McKinsey fired Tom Peters for being too brash, too outspoken (imagine that) just before the publication of In Search of Excellence, they set him free to unleash his clear-eyed, unvarnished, take no prisoners view of management.