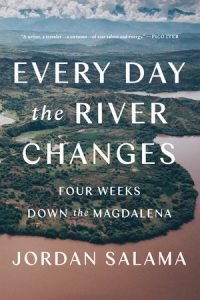 “I read this brisk and beautifully wrought travelogue, a deeply personal meditation on the Magdalena River and its cultural, political, and geographical sphere, with a tingle of excitement, a sense of waking to a new world. Jordan Salama is a profoundly gifted writer, and this book is a real achievement. I will read everything of his in the coming years.” —Jay Parini, author of Borges and Me

A born journalist. — John McPhee, author of Coming Into the Country

Travel writing for a new generation, by a protégé of John McPhee and Pico Iyer, about a journey along the Magdalena river in Colombia, exploring life by the banks of a river at risk, and how a country moves on after conflict.

An American writer of Argentine, Syrian, and Iraqi-Jewish descenttells the story of the Magdalena River, nearly one thousand miles long, the heart of Colombia: territory of Gabriel Garcia Marquez as much as of the Middle Eastern immigrants who live by its banks. Following the river from its source high in the Andes to its mouth on the Caribbean coast, Salama writes against stereotype and toward the rich lives of those who live along its path, including a builder of wooden canoes, biologists who study wild hippopotamuses, a jeweler practicing the art of silver filigree, and a traveling librarian whose donkeys, Alpha and Beto, haul books to rural children. Joy and mourning come together in this surprising debut, a travelogue of a country too often seen one-dimensionally, and a tale of adventure following a legendary river.