Art and Post-History. Conversations about the End of Aesthetics and More 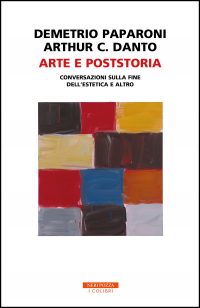 Art and Post-History. Conversations about the End of Aesthetics and More

The credit for the diffusion and knowledge of the thought of the American philosopher and art critic Arthur Danto (1924-2013) in Italy is by far Demetrio Paparoni’s. – Luca Beatrice, Il Giornale

A fascinating book, which sets philosophy as ground for talking about our times, especially about the new artistic “provocations”. – Vincenzo Mazzaccaro, SoloLibri.net

These are dialogues in which the entire cultural debate of the 20th century is summarized, retracing trends, fashions, movements and the market, up to analyzing the “post-history” that animates the debate about the future of contemporary art. – AlessandraPacelli, Il Mattino

Years of exchange of views on art with one of the most read and estimated critics and philosophers of the postmodern era make this book a point of reference both for those who approach contemporary art as well as Danto’s and Paparoni’s thoughts, and those who are already familiar with the covered topics. – Arte, Rai Cultura

Despite the title, Arte e Poststoria comes out of the shadow of those heavy words (post-aesthetic, post-art, post-history), this book gathers conversations full of ideas and free like walks outside, in an ideal park of contemporary art. – Beppe Sebaste, il Venerdì di Repubblica

From the nineties and until recently before the death of Arthur Danto, Demetrio Paparoni repeatedly met him and his wife Barbara Westman, artist and illustrator, author of many covers of the New Yorker. Arthur Danto is one of the most lucid and original philosopher of the last decades. A collection of brilliant conversations on contemporary art, enriched with splendid color tables and illustrations. An interesting reading of how artistic thinking has changed from the sixties to the present day.

This book collects conversations on art between Arthur C. Danto (1924-2013) and Demetrio Paparoni which took place between 1995 and 2012. Arthur C. Danto, professor at Columbia for over forty years, was by far most quoted and translated American art critic and philosopher in the last decades. His thought has a strong impact in defining a new way of understanding art criticism. Together with his colleague and friend Demetrio Paparoni, Danto deals with themes related to the development of contemporary art. Two other important artists participated in these conversations Mimmo Paladino and the philosopher Mario Perniola.

Demetrio Paparoni and Arthur Danto shared a marked interest in the abstract art of the nineties. Their friendship led them to entertain a rich correspondence and to record the conversations that are at the origin of the book.

Their publication now, years after the death of “one of the most read art critics of the postmodern era” (New York Times), is primarily due to the fact that the issues that are debated in it embrace themes that are still the subject of question in today’s artistic-philosophical panorama. From American Pop art to Minimalism, from abstraction to appropriationism, the covered topics touch, in fact, the central core of Danto’s thought: those concepts of the post-historical art and the end of aesthetics that have oriented, and continue to orient, the discussion on the meaning and destiny of contemporary art.

These conversations, so rich in the spontaneity of the dialogue, help to better understand the developments of current art.