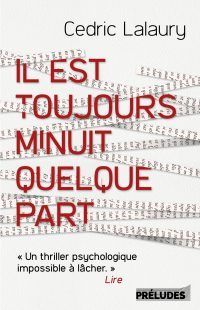 “At last, a rare page-turner like those of great French authors before him.” — SANGFROID

“You’ll be quickly swept away by the plot of this psychological thriller that you’ll want to read in one sitting.” — Le Parisien

“A exciting psychological novel full of impact from start to finish that examines the notions of guilt and of forgetting the past!” — Marianne Kmiecik, librairie Les Lisières, Roubaix

“A good cocktail of suspense and rhythm that enfolds us in its wake.”— L’Instant des lecteurs

“I devoured this book, following the author through the twists and turns of the human mind.” — L’Entre Deux Mondes

“A lot of surprises, suspense, spread-out secrets, and unexpected developments that make one think of the excellent The Truth about the Harry Québert Affair, through all its small final touches. A prize amply merited.” — Caroline Vallat, FNAC Rosny 2

“I was captivated, very curious and taken by this psychological novel.” — Passion lecture d’Annick

“I really liked this novel, […] where the suspense climbed in crescendo.” — Pinklychee’s Readings Millepages

“His style, his efficient way of teasing suspense and making it bounce off the story is expected of this first novel—even from the first pages, it was difficult to put down.” – La voix du Nord

An addictive novel that you won’t want to let go of until you know just where the author wants to lead you. Excellent. — Véronique Bruneau, Cultura Plaisir, Les Clayes-sous-Bois.

The past that resurfaces, an enigmatic writer, the dissolution of a circle of friends, a book inside a book and an east coast American zest for atmosphere. This first [book] deserves some giving. — Le Point

Bill Herrington is a happy man. In his fifties, an ideal husband, and a happy father, he holds a position as a professor of literature at a prestigious university. Everything works for the best in the best of all worlds… until the day he finds, in his locker, the copy of a sensational novel published by a mysterious unknown: Richard Philip Kirkpatrick. Not enough to upset Bill.

But one small detail: the novel tells a true story, that of a crime that Bill was persuaded that nobody had ever known about.

This book soon invades Bill’s existence and contaminates everything around him like a virus. His peaceful and comfortable life, as well as his psychological equilibrium, threaten to shatter into pieces under the devastating effect of this vengeful novel that has awakened all the ghosts of the past.

A formidable literary thriller in the line of The Truth about the Harry Québert Affair, carried by a plot worthy of The Secret History and an atmosphere à la Shutter Island. 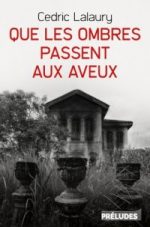