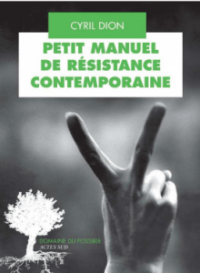 Dion’s latest essay presents the idea that to save the planet, we must go further and engage in a ‘cultural battle’ based on ‘a desirable ecological vision of the future’. In other words, this powerful essay is very convincing in it’s argument that eating organic and vegetarian, opting for zero waste and 100% renewable energy is not a ‘necessary evil’, such as a trip to the dental hygienist, but is an idea as exciting as consumer society was during it’s time. – Arnaud Gonzague, L’Obs

Cofounder of the movement ‘Colibris’ with Pierre Rabhi and writer and director of the ‘Domaine du possible’ collection at Actes Sud, soon-to-be 40 Cyril Dion has had to face two main types of question in the debates that followed the screening of his film: ‘what can be done about the eco-crisis?’ and ‘are we too late?’ He henceforth created this dense and powerful little 145-page book, presented as a manifesto. – Olivier Nouaillas, Life

In the course of two years, Cyril Dion has visited eighteen countries and nearly two hundred towns promoting, Demain, the successful documentary he produced with the actress, Mélanie Laurent. At each stage of his journey, the same questions returned: What can we actually do? Where do we start? Why does action matter, anyway? Isn’t it already too late?

It was a period of particularly bad news: the acceleration of global warming, the widening of the inequality gap, the explosion in immigration, intolerable levels of waste, the Trump election, and the realization that in the last 40 years, 80% of Europe’s insects have disappeared and 50% of vertebrates. Scientists highlight the emergency of the situation and how little time we have left to react. So can we react to such a catalogue of disasters?

In this small incisive and practical book, the author questions the necessary scope for action. It is perhaps a challenge as huge as world war. If we continue on our current trajectory, numerous research studies predict that the world’s population will collapse in a matter of decades.

Surely the time has come to resist the logic governing this massive and frenetic destruction of our ecosystems, as others resisted Nazi brutality in the past? Who should we be resisting against?

This logic, after all, has become part of our metabolism; it is within us as well as outside. Through this optic, resistance is also about inner-transformation as well as protest.

Without providing definitive answers, Cyril Dion offers a number of possibilities for action: individual – as part of our every-day lives; collective – on a neighborhood, regional, or national level; and political – based on examples of large-scale mobilization that has upset whole countries.

The author goes further and invites us to reconnect with our inner vitality, and live our existences so that everything we do, from our professional life to our daily chores, can contribute to the construction of a world in which we can all live. A world in which we can flourish and prosper and contribute to rebalancing inequality and ecosystems, not at the expense of others and of nature.

Born in 1978, alongside Pierre Rabhi, Cyril Dion is the co-founder of the Colibris movement and the Kaizen journal. In 2014 he published his first collection of poetry, Assis sur le fil, (éditions de La Table ronde). In 2015, alongside Mélanie Laurent, he wrote and co-directed the film, Demain, which won the 2016 César for best documentary. In 2017, he published his first novel with Actes Sud, Imago. 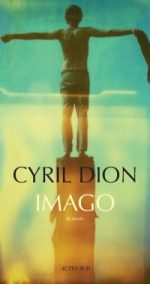