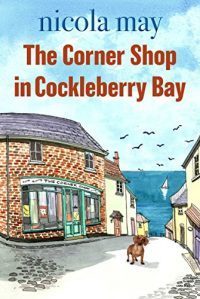 Rosa Larkin is down on her luck in London, so when she inherits a near-derelict corner shop in a quaint Devon village, her first thought is to sell it for cash and sort out her life. But nothing is straightforward about this legacy. While the identity of her benefactor remains a mystery, he – or she – has left one important legal proviso: that the shop cannot be sold, only passed on to somebody who really deserves it.

Rosa makes up her mind to give it a go: to put everything she has into getting the shop up and running again in the small seaside community of Cockleberry Bay. But can she do it all on her own? And if not, who will help her succeed – and who among the following will work secretly to see her fail?

There is a handsome rugby player, a sexy plumber, a charlatan reporter and a selection of meddling locals. Add in a hit and run incident and the disappearance of a valuable engraved necklace – and what you get is a journey of self-discovery and unpredictable events.

With surprising and heartfelt results, Rosa, accompanied at all times by her little sausage dog Hot, will slowly unravel the shadowy secrets of the inheritance, and also bring her own, long-hidden heritage into the light.

The cast of the runaway bestseller, The Corner Shop in Cockleberry Bay, are back – including Rosa, Josh, Mary, Jacob, Sheila, new mum Titch and, last but by no means least, Hot, the adorable dachshund.

Newly wed, and with her inherited corner shop successfully up and running, Rosa Smith seems to have all that anyone could wish for. But the course of true love never did run smooth and Rosa’s suspicions that her husband is having an affair have dire consequences.

Reaching rock bottom before she can climb back up to the top, fragile Rosa is forced to face her fears, addiction and jealousy head on. With a selection of meddling locals still at large, a mystery fire and Titch’s frantic search for the real father of her sick baby, the second book in this enchanting series will take you on a further unpredictable journey of self-discovery.

BACK TO COCKLEBERRY BAY (Book 3, March 2020)
The proviso of Rosa being gifted the corner shop in Cockleberry Bay was to never sell it but pass it on to someone who really deserved it. Through a series of unwitting tests and trials, including both deserving and non deserving recipients… will Rosa eventually find someone she is happy to entrust it with or will it remain part of her family history for ever?

Praise for Nicola May’s books include:

‘This book will twang your funny bone & your heartstrings’ – Milly Johnson

‘A fun and flighty read’ – the Sun

‘One of those books that I can’t stop thinking about way after I’ve read it! – Kim The Bookworm

“This book is so addictive that you will literally lose 3 hours of your life, and you won’t care!” – Cara’s Book Boudoir

“It’s one of my favourite books of this year so far.” – That Thing She Reads

“I found this to be an enjoyable, fun, edgy and not your normal light and fluffy chick lit read – more please!!!” –  Goodreads

Award winning author Nicola May writes what she calls chick lit with a kick! All of her books have been in the bestselling Kindle charts. The School Gates & Christmas Yves won awards for Best Author Published reads at the Festival of Romance in 2012 and 2014 respectively. Let Love Win was also nominated in 2013. Love Me Tinder was ebook of the week in The Sun newspaper. Nicola likes watching films that involve a lot of swooning and eating cream teas.