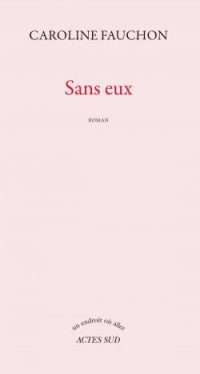 In Paris in the near future, Lisa witnesses the society around her coming to be dominated by women. The men around her gradually disappear and a new world comes into being where women slowly replace men, leaving women free to hunt out the few remaining males or to do without them entirely. A mutation that degrades the Y chromosome results in changes in the body’s architecture and in men becoming physically weak, and it looks certain that they will ultimately become extinct.

Lisa observes these changes and shares her thoughts on this ‘Great Mutation’ in her ‘With-out Them’ blog, and ends up accepting a post with the Tale of Our Origins department. In this society where men are now a forgotten myth, children are conceived via sperm banks. Lisa’s task is to draw up succinct guides for future mothers containing creative ideas to help them flesh out in their imaginations the identity and personality of the male parent.

Caroline Fauchon is a literature and drama teacher at a Paris secondary school. Sans eux is her first novel.