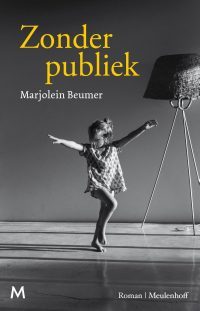 The characters are portrayed so lovingly that to learn about their fate is deeply touching. — Lies Visschedijk, actress

Impressive and moving, I read this novel in one breathless sitting. — Monique van de Ven, actress

The debut novel of scriptwriter and former actress Marjolein Beumer, who also wrote the screenplays for the successful Soof-films.

A moving novel about the fallibility of life, the power of imagination and the bond between mothers and daughters

As the grande dame of Dutch theatre, Catherina Pecheur always found herself to be the center of attention, whether on stage or in life. However, everything changes when she starts to lose her memory. Suddenly she is dependent on the support of her daughter Laura. But Laura is not willing to welcome a mother into her life who has never been there for her. On top of that, she has her own daughter to worry about.

Zonder publiek is a story about the beautiful and challenging aspects of being a mother. About the fallibility of life, the power of imagination and the fear of not being good enough. But above all, it’s a compassionate and moving novel about family and the vulnerability of love.

Marjolein Beumer (1966) started her career as an actress, after which she became a successful scriptwriter. Amongst other things, she wrote the screenplays of the greatly beloved films De Storm, Soof and Soof 2. After this, she published columns. Zonder publiek is her debut novel.