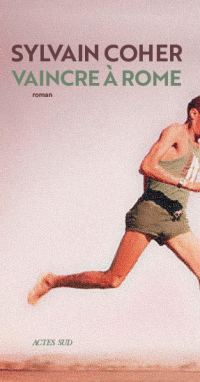 In the first person and with a writing carried by the gasping breath of the long-distance runner, Sylvain Coher allows us to relive the inner magic moment with a crazy intensity. With this brilliant Winning in Rome, reading has never been so sporty! – Léonard Desbrières, Lire

Saturday 10 September 1960, Rome Olympics: the marathon is due to be run in the heart of the Eternal City. Sixty-nine competitors, but just one winner. And it is in the head of the runner who will ascend to the highest step on the podium that we find ourselves for a journey lasting 2 hours, 15 minutes and 16 seconds.

In the midst of decolonisation and the dismantling of European empires, an African shepherd wins the gold medal and brings glory to an entire continent.

Sylvain Coher infuses her language with the rhythm, movements, accelerations and endorphins of a long-distance race as it gradually builds up to the final sprint.