What Comes Back to Us 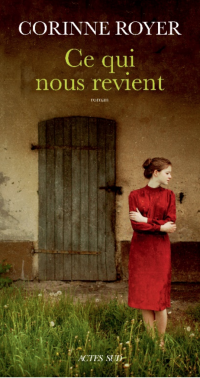 What Comes Back to Us

Corinne Royer writes a feminist and intelligent novel about loss and absence, and the ‘Matilda effect’: the denial of women’s contribution to research. Brilliant. — Adeline Fleury, Le Parisien WE

A poignant novel that can be read like a thriller… The narrative structure offers magnificent reading ranges and an unusual syntax for the chosen words — François Xavier, Le Salon Littéraire.com

What Comes Back to Us the great fourth novel of Corinne Royer. — Serge Bressan, Le Quotidien (Luxembourg)

Thanks to Corinne Royer’s book, the name of Marthe Gautier finally comes out of the shadows — Marie Colmant, France Info

Louisa Gorki was ten when her mother kissed her and said ‘See you in three days’ time!’ – and she never came back. Only two months later did the girl learn from her father why Elena had left: she hadn’t gone off to work but rather to abort a Down syndrome child. After the procedure, she had felt incapable of returning. Fifteen years later, Louisa is studying for a PhD in medicine focusing on the identification of the extra copy of genes on chromosome 21. In the course of her studies she meets Marthe Gautier, a scientist who played a key role in discovering this trisomy but whose contribution has never been recognised.

Ce qui nous revient are the memories, that subtle arranging of elements of the past that sculpts every individual, but the title also contains a demand: the story of Marthe Gautier is an illustration of the ‘Matilda effect’, or the process of denying or minimising the contribution of female research scientists in the interests of their male colleagues.