The Weight of the Snow 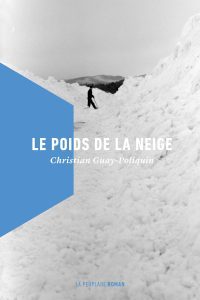 The Weight of the Snow

“Christian Guay-Poliquin succeeds in offering a dark, claustrophobic and hypnotic thriller. Its beauty is aware of the cold and dramatic landscape, the cracking social bonds, the dismay and the sleeping violence suffocated by winter, all ready to come back to life at the first signs of spring. Le Poids de la neige is a Nordic hymn, one of the highlights of the autumn.” — Christian Desmeules, Le Devoir

“The brilliant and well-mastered writing of this new author
endowed with an already confirmed talent manages to captivate us.” — La Presse

“Christian Guay-Poliquin does not take lightly the winter and it makes us feel the oppressive hardships by his writing prowess that fall in burst, in a novel that has the ferocious temperament of a blizzard.” — L’Actualité

“In Le poids de la neige, a decidedly Nordic novel, the ubiquitous snow swallows up the country and the people. Against an apocalyptic background, the tension is unrelenting. Minor and major fears are exacerbated, like the dread of betrayal. The poetry in Christian Guay-Poliquin’s writing keeps us spellbound to the end of winter.” — GGBooks Jury

After Le Fil des kilomètres, Christian Guay-Poliquin comes back with a dark and hypnotic thriller of a cold and dramatic beauty.

Just outside a small village, two men – Matthias and an injured young man who has been entrusted to his care – find themselves together in the sun lounge of a formerly grand but now abandoned house with no electricity supply. Their agreement is that the old man will nurse the younger man back to recovery in exchange for firewood, food and, most of all, for a place in the convoy which will depart for the town the following spring.

As the snow grows ever deeper around them, each day brings with it its own assortment of challenges. Huddled by the wood burner, these two individuals laboriously develop a mutual understanding through their conversations and the visits of Joseph, Jonas, Jean, Jude, José and the beautiful Maria. Rumours from the village permeate into their isolated environment, the winter weighs heavily on them and the tension is palpable. Will they be able to hold out?