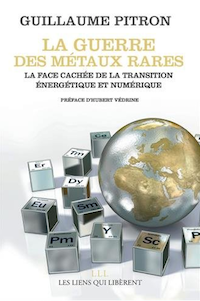 ‘[T]he journalist and filmmaker warns against the optimistic belief that technology is the solution … At a time when many claim to be “citizens of the world” or retreat into naive or hypocritical protectionism, Pitron’s book is an attempt to open people’s eyes to the consequences of their societal choices and lifestyles.’ — Green European Journal

‘French Writer and analyst Guillaume Pitron warns about growing reliance on rare-earth metal – which are necessary to build high-tech products … He shines a light on “the untold story” of the energy and digital transitions.’ — European Scientist

The resources race is on. Powering our digital lives and green technologies are some of the Earth’s most precious metals — but they are running out. And what will happen when they do?

The green-tech revolution will reduce our dependency on nuclear power, coal, and oil, heralding a new era free of pollution, fossil-fuel shortages, and cross-border tensions. But there is a hidden dark side to this seemingly utopian vision.

Drawing on six years of research across a dozen countries, award-winning journalist and documentarist Guillaume Pitron reveals that, by breaking free of fossil fuels, we are in fact setting ourselves up for a new dependence — on rare metals such as cobalt, gold, and palladium.

These are essential to electric vehicles, wind turbines, and solar panels, as well as our smartphones, computers, tablets, and other technologies. But we know very little about how rare metals are mined and traded, or their environmental, economic, and geopolitical costs; meanwhile, China has captured the lion’s share of the market and is using it to consolidate its position as a leading global power.

The War Over Rare Metals is a vital exposé of the ticking time-bomb that lies beneath our new technological order.