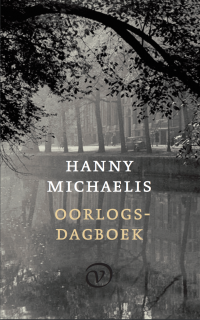 ‘The successor to the diary of Anne Frank.’ — Het Parool

When the personal items of one of the most important post-war, Dutch poets, Hanny Michaelis, were found to include her diary from the German occupation of the Netherlands, it caused a literary stir. Like Anne Frank, Michaelis was Jewish and forced into hiding. Inevitably, the diary is now in comparison with Anne Frank’s. The large number of notebooks that were found, have been published in two annotated volumes: the first covering 1940 and 1941; the second 1942-45. Sections from these two diaries have, on special request, been carefully selected and a 400-page war memoir, directly from Micherlis’ war diaries has been created.

In 1942 Michaelis had to take the drastic decision to go into hiding. On the 1st of January she noted: ‘Even the fact of sleeping in my own bed, in my own room, tonight for the last time does not fill me with the sadness I’d feared.’

She was determined to remain in high spirits; despite the tears welling up when the light was turned off on her first night in her new room, she wrote: ‘I don’t feel so very unhappy.’ In the words of the Dutch dailyNRC Handelsblad, the diary balances between ‘heights of optimism and pessimistic depths’.

Hanny Michaelis hid under a false name, working as a live-in maid in an author’s household, which gave her the ‘privilege’ of being able to read books, write, and – despite life-threatening circumstances – meet well-known writers and artists.

Michaelis was clearly more mature than the younger Anne Frank, but similarly, her diary became her most important ‘conversation partner’. She describes the passing of her youth and tells of her early attempts at literature and her terrible uncertainty about the fate of her parents, who had been deported to Germany. She eventually discovered that they were murdered in 1943. Michaelis survived, producing a unique testimony of a dark time.

Hanny Michaelis (1922–2007) was born in Amsterdam. In 1941 she took her school leaving exams and shortly afterwards she and her parents went, separately, into hiding. They never saw each other again. Hanny’s parents were arrested in 1943 and were taken first to the camp at Westerbork and then to Sobibor, where they were murdered. Shortly after the liberation of the Netherlands, Michaelis returned to Amsterdam, where she stayed for the rest of her life. For years she worked in the Amsterdam city council’s department of artistic affairs. She also published six collections of poetry. Her wartime diaries recently appeared in two volumes, both of which were enthusiastically received.