Voices in the Fog 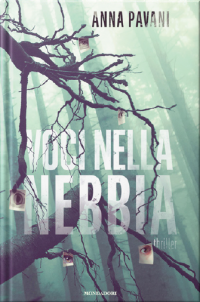 Voices in the Fog

Voices in the Fog provides atmosphere, imagination, an intricate plot and vivid settings for a gripping and involving read. Pavani keeps the story together, never losing control as it unravels. This is an excellently balanced novel with great pace. — Giordano Aterini, Mondadori

An intricate plot and vivid settings for a gripping and involving read.  A page turning thriller set in the northern Italy, where a mysterious island hides murders from the past.

Imagine a green and luxuriant island and five children who steal a boat to go and visit it. Imagine a sudden fog enveloping everything. And there, in that strange vegetation, imagine a tree illuminated by the sun, its leaves glittering and vibrating in the breeze, filling the air with a rustling sound. Only they are not leaves but photographs. Of eyes.

Nineteen years later, those same eyes haunt the dreams of Lisa Harding, a detective in the London homicide division. Lisa remembers very little of the last few weeks. Her colleagues tell her that she was attacked and risked dying but, as she tries to reconstruct those events, re-examining the murder case she was working on, Lisa realizes that the flashes of memory rising to the surface precede all this and are long-dormant memories dating back to a far-off summer on the shores of a lake in the mountains of Trentino, which bring with them increasingly disturbing details: the corpse of a woman on a dark and brooding island and a little girl who never returned. Lisa is certain that these memories are also linked to the murderer she is hunting for and decides to return in secret to the little town where that far-off holiday took place, never imagining that something terrible still disturbs the waters of the lake.

Anna Pavani lives in the beautiful Valpolicella, near Verona, Italy’s wine-producing gem. She loves nature and animals, she owns a horse, a dog and two cats, all rescued pets. In her spare time she enjoys painting inspired by her surroundings and also by the sea distant in space but close to her heart. Keen of adventure stories in the past, she has always been fascinated by the mysteries of the supernatural and of thriller fiction. Voices in the fog is her debut novel with publisher Mondadori.