Violence is All We Have Left 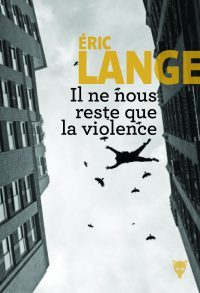 Violence is All We Have Left

Eric Lange plunges us deep into our being and make us discover that we are not immune to our own violence. — Paperblog

A cruel and percussive fable, Eric Lange’s thriller knocks out without mercy the cynicism of our time, the tyranny of money and the stubbornness of aversion. A world of predators that he bites with a scathing irony. Deliciously cruel. — Paris Match

What if violence were all we had left? A chillingly realistic crime tale about today’s fiercely individualistic society, where nothing is beyond the pale.

Jingle. The switchboard is swamped with calls. Everyone wants their complaint, or perhaps just their voice, to be heard. But Lemarc, the new director of the radio station, whose nickname is “The Terminator,” says the call-in show doesn’t generate enough profits. And the show’s host can’t think where to find a way to save it… except at the bottom of a glass of rum.

But having gotten caught up with a dangerously sleazy character, he finally comes up with a plan: get the director out of the way long enough to let the show catch on. But what was supposed to look like a car-jacking goes terribly wrong, and Lemarc succumbs to his wounds. Rather than being stunned by this unintended turn of events, the show’s host is surprised not to feel a thing. Is killing really that easy?

The floodgates of violence are now open.

A caustic, uncompromising piece of crime fiction on the subject of the violence inherent in modern society.

A novel that’s hard to put down. —  Zonelivre.com

Eric Lange offers a timely – and terribly caustic – analysis of the suffocating situation of poverty and loss of status. — Ccontagieux.com

Fast-paced narration, a real page-turner of an investigation. — Cinquiemedecouv.com