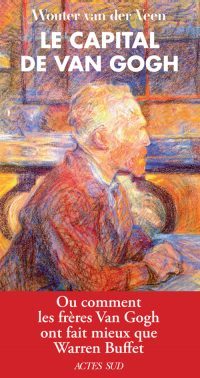 “Author of five books on the painter,[Wouter van der Veen] really applies himself in this last, Van Gogh’s Capital, to deconstruct the myth of a crazed artist. Based on the famous correspondence between Vincent Van Gogh and his son, Theo, he establishes just how much the painter’s short life was devoted to a detailed and clear-headed knowledge of the art market. His success, certainly posthumous, is the result of a keen sense of supply and demand. This, in itself, is nothing amazing; it might even be a given. But in the case of Van Gogh, raised to the rank of painters’ saint (the story of this sanctification would be exciting to read), such an assertion reads of blasphemy.” — Lisbeth Koutchoumoff, LE TEMPS

“A lively and audacious account, pieced together in an original way, Or How to Write Art History Against the Tide.” — Daphné Bétard, BEAUX-ARTS MAGAZIN

This book reveals an unexpected and rather unsettling truth: The Van Gogh brothers, famous in the history of art for sacrificing everything for the sake of Vincent’s art, were in reality brilliant entrepreneurs with a keen eye for the main opportunity.

Through acquiring works by Gauguin, Degas, Monet and many other artists, in addition to Vincent’s own artistic creations, the two brothers patiently amassed a priceless collection of art. In so doing, they created a business whose success is unrivalled to this day.

This reality emerges from the correspondence of Van Gogh, where clues to the brothers’ true vision have been overlooked by scholars for more than a century: it is an almost prophetic vision of how the art market would evolve and a foreshadowing of their own immense success.

Refreshing and witty, wide-ranging in its scope and varied in its structure, this book explores how Van Gogh ultimately came to be the archetype of the misunderstood genius, and how in truth he was anything but that.

The author Wouter van der Veen, who is the secretary-general and head of research at the Institut Van-Gogh, is a world-renowned expert on the life and work of the Dutch master. Le Capital de Van Gogh is his sixth book on the subject. He is also the creator of the ‘Van Gogh’s Dream’ application and the author of numerous articles for academic reviews and publications aimed at the general public.