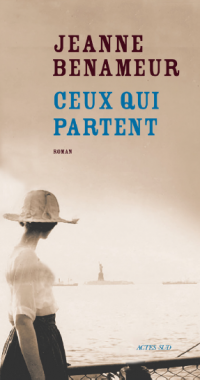 Here they are, the thousands for whom destiny is suspended between two lives, the one before and the one after. With Those Who Depart, Jeanne Benameur delivers a homage to the men and women who had the audacity to abandon earth and maternal languages, to the rhythm of the music of staunch liberty, guided by hope. — Page des libraires

To those who disturb the world with their consensual retreat and internal examination, Jeanne Benameur addresses a heroic ode that inexorably investigates current events […] we let ourselves be effortlessly conquered by the poetic bursts which erupt over us as cliches, a dance or an embrace. — Manon Houtart, Le Nouveau Magazine Littéraire

A handful of them come ashore on Ellis Island and with them the 20th century takes its first faltering steps along the path to liberty and happiness.

In Andrew Jónsson’s photographs we can see the Italian actor Donato with his red book in his pocket and on his arm his daughter Emilia, who is ready to flourish. And Esther the Armenian, the orphan of an entire people. And the gypsy clan around Gabor the violinist. And then all those who arrived before them who have already started to build this city which is reaching for the skies and for the future. The family of the young Andrew have left behind them in Iceland the most profound of sorrows and there is a tacit solidarity in the silence of the father, the complicity of the grandmother and the very American mother whose sights are set on the future. There is also the free-spirited Hazel who prostitutes her body with her head held high and the remarkable little Lucile Lenbow. They are all seeking to give shape to their exile and to lay the foundations of their own country. And what if the night were the only universal language?

A blend of novel and poetry, Jeanne Benameur’s art engages with the world and the people who inhabit it through the prism of liberty and authenticity. A body of work with profound and powerful resonances, most of which has been published by Actes Sud.