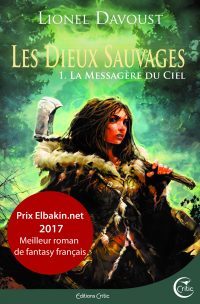 Lionel Davoust faces up to the rules of the English-written fantasy – very close to G.R.R. Martin – and can be ranked next to the greatest English-speaking authors. — ActuSF

During this time period, the artech (technological magic), ubiquitous during the imperial era, stops working and, as a result, Anomalies devastate the whole planet. Human societies withdraw to form tribes and fractioned kingdoms in an abject deprivation and a reality full of diseases, oppression and starvation. People live in fear, are led by superstitions, and try to build a new worldview on anything that might give them an apparent order and hope. This is an ideal time for new dictatorships linked to intolerant and segregationist religions to arise.

The Wild Gods draws its inspiration from the myth of Joan of Arc and has a fantasy depth as well as a feminist point of view. The series’ heroin, Meriane, is a brave and kind Joan of Arc. Heroin in spite of herself, she will have to climb the hierarchy of an intolerant and patriarchal religion, mishandled by forces bigger than her.

This ambitious epic fantasy saga, inspired by the story of Joan of Arc, could compete against the best known authors of the genre: Brandon Sanderson, David Gemmell or Paul Kearney.

The legend is taken into the universe of a talented author, who has resolutely underlined the feminist traces of the story. Mériane is above all a heroine in spite of herself, her own fears and inexperience.

The city of Loered, The River’s Lock, is bowing under the pressure of the god Aska’s demonic armies, half humans and half machines. Famished, sickened and desperate, the population holds on to one thing only: their faith in Meriane, the god Wer’s envoy. Whereas at the highest rank of the kingdom Izara, the queen regent, struggles to save whatever she can still save, prince Erwel travels and begs for a union of the provinces to be formed in order to help Loered. Hoping to survive, Meriane and her followers have no choice but to risk provoking divine wrath. Indeed, back to the ancient time of the world, buried under the Asrethia Empire’s ruins, a power capable of competing with Aska’s might lie.

Lionel Davoust was born in 1978 and lives in Brittany. Former halieutic engineer, he is now devoted to his first passion: writing. The Wild Gods are an ambitious and flourishing epic-fantasy tetralogy, following George R. R. Martin or Brandon Sanderson’s steps. 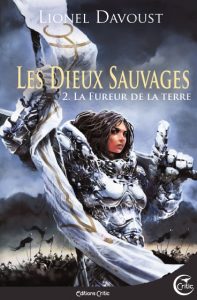