The Voice on The Phone 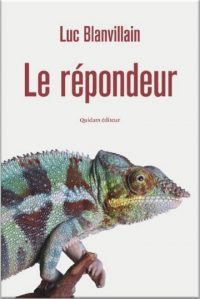 The Voice on The Phone

“Luc Blanvillain has a talent for delving into literary and artistic creation in the tyrannical era of smartphones and omnipresent media, citing the ‘unrelenting and pertinacious nature of the digital rhizome, of reader’s imaginative comments and trolls’ energy.” – Delphine Peras, L’Express

“The story of a match that never goes offline. One man answers the phone and the other writes. Who is who at the end of this novel hinting the lines of the communications era are breaking up?” – Muriel Steinmetz, L’Humanité

A famous novelist hires a young and talented impressionist to answer his phone and pass for him. A tongue-in-cheek comedy of manners that elegantly and delicately pulls us head-first into a fantastic, off-thewall story that is chock full of comic twists.

Baptiste is a master of impressions. He can mimic hundreds of voices perfectly, baring their very souls and can even raise the dead. The only problem is that his talent does not pay. A lowpaying job at a non-profit theatre allows him to waste his talent on a handful of distracted viewers. Until one day, a man in great need of silence comes to him.

Not just any man, but Pierre Chozène – a famous and discreet novelist, highly-solicited, much to his dismay, by intrusive fans, petitioners, socialites, and overall annoying people. He wants Baptiste to answer his phone. With this job in mind, he confides his life’s story in Baptiste, ridding himself of his pathetic secrets at long last and thus freeing himself from reality in order to lose himself in writing.

Baptiste thus becomes his voice on the phone. At their own risk.