The Triumph of Stupidity 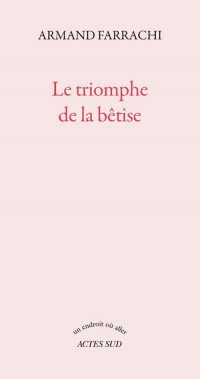 The Triumph of Stupidity

“His idea is not to go backwards, but to raise awareness about the hidden meaning of this trend” — Kerenn Elkaim, Livres Hebdo

“Acclaimed misanthrope, Armand Farrachi has a sharp pen and a cruel lucidity on the time that he autopsies the more he examines it. Here, there is no cure for evil that promises to be fatal. ” — Diane Lisarelli, Le Nouveau Magazine Littéraire

“A misanthropic and querulous text that however does not lack of humor” — Raphaël Bourgois, France Culture

“Armand Farrachi’s point of view is very radical. He demolishes the media of information, communication, decision, he goes to the deep end. He deplores very important things such as the loss of the quality of language, the importance of our vocabulary … He tries to point out that stupidity has triumphed, it is our society today. ” — Aliocha Wald Lasowski, L’Express, France Culture

In this short and rebellious essay, Armand Farrachi adopts the caustic tone of the pamphleteer in pondering a subject as daunting as it is fathomless: stupidity, whose deployment in our opinion- driven societies has reached new heights in state institutions, in educational and cultural bodies, in the media and everywhere else. It would appear that if history is going in a particular di- rection, it is not towards liberty or the ‘victory of the people’ but rather towards the triumph of mass stupidity. A stupidity that is deliberately manufactured by industry, the press, the education system, politics and advertising, because the economy needs stupidity, technology accentuates it, and ‘democracy’ consecrates it.