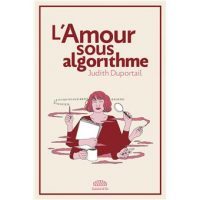 When freelance journalist Judith Deportail discovers that Tinder secretly grades its users, she decides to discover what her score is. Her discoveries go beyond her imaginings. In this addictive book, a young woman’s love life is intertwined with startling revelations.

After a break-up, Judith, a young journalist, gets herself a gym subscription and downloads the dating app Tinder. On doing so, she discovers the giddy highs of feeling desired by dozens of men. The app swells her ego as much as it undermines it.

One day, she discovers that the app secretly attributes a “desirability” score to each of its users, and decides to discover how much she is worth. Hackers, lawyers, mathematicians: the journalist assembles an army to ensure her investigation succeeds. Alongside, she stays on Tinder and goes on date after date, falling in love, weathering the fallouts. Judith Deportail’s determined investigation leads to the discovery of two documents who go much further than she had even imagined. The first is a total of 800 pages: the entirety of her data, collected by Tinder. The second is a mere 27 pages, but its contents would set the world’s most-used dating app trembling.

As the author recounts her gripping investigation, the portrait of a striking young woman emerges: liberated, powerful, resolute and touching.