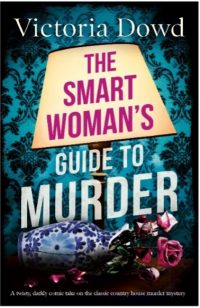 A faded country house in the middle of nowhere. The guests are snowed in. The murders begin.

Withering and waspish, Ursula Smart (not her real name) gate-crashes her mother’s book club at an isolated country house for a long weekend retreat. Much to Mother’s chagrin. Joining them are Mother’s best friend, Mirabelle, Aunts Charlotte and Less, and Bridget with her dog Mr Bojangles. It doesn’t matter that they’ve read Gone Girl three times this year already, this retreat is their chance to escape bustling suburbia. But someone has other ideas.

A body is found in the grounds. Is a lone killer hunting them? Or has one of their own group embarked on a killing spree? What they need is to stop sniping at each other long enough to solve the mystery before the killer strikes again. What they need is a guide to survive.

Ursula Smart (not her real name), realizing therapy alone cannot teach her how to survive this life, is determined to make some changes. She signs herself up for a survival course — along with her mother, aunts Charlotte and Mirabelle and Bridget.

But the promised gentle weekend of foraging and camping in the Outer Hebrides swiftly turns into a desperate battle for survival.

Their boat capsizes. Washed up on an uninhabited island, the Smart women face starvation, freezing conditions and — worse — no Wi-Fi.

Then the murders begin.

Someone is killing off them one by one. Will the Smarts escape, or will they be next?