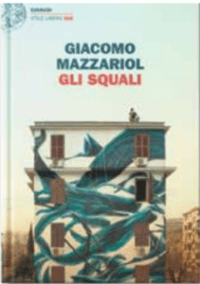 After the huge success of his debut book Mio fratello rincorre i dinosauri, with 200.000 copies sold, and two years at the top of the bestseller list, Giacomo Mazzariol comes back with a powerful new novel. The tale about a generation obliged to keep constantly on the move, because, like sharks, if they stop moving, they die.​ ​Following the story of Max, Giacomo Mazzariol tells about the dreams, hopes, troubles of his generation in an authentic and universal way.

They’re fast, hungry, and move silently through a noisy world. They can never stop. They’re the young people of the start of the millennium, they’re the sharks.

It all happens in a second.

Max is in his last year of high school in provincial Veneto. He’s an ordinary sort of guy who’s never distinguished himself in any particular way. Until, quite without any ambitions and almost out of boredom, he creates an app directed at pupils who have to decide what they’re going to study at university. Unexpectedly, the idea meets with overwhelming success and immediately after his final school-leaving exams, the boy find himself with a contract to go and work in Rome for a company that wants to develop his intuition.

Giacomo Mazzariol was born in Castelfranco Veneto in 1997. Mio fratello rincorre i dinosauri (My Brother Chases Dinosaurs) (Einaudi Stile Libero 2016), his first novel, is a best seller still in the sales charts after two years. With the scriptwriting collective Grams, he authored the TV series Baby, which is to be broadcast by Netflix in over a hundred and ninety countries.