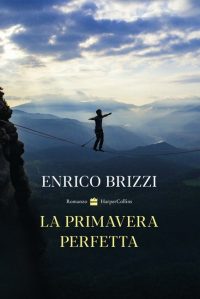 Enrico Brizzi is one of the most iconic Italian authors of Generation X, whose dreams and illusions he has managed to capture with brilliant sharpness in his novels. La primavera perfetta ideally follows those kids of the 90s, now forty, in their transition towards the compromises, disappointments and concerns of adult life.

Luca and Oliver are brothers who love each other but couldn’t be more different. Oliver is a world-renowned cycling champion, famous for his talent, his commitment and strict self-discipline. On the contrary, Luca is a hedonist who has made very few sacrifices in his life: after an apparently successful career as an advertiser, he has settled for being the manager of his younger, talented brother, looking out for Oliver’s life, full of challenges, training and diet, whilst collecting his large commissions.

Luca has always taken the easy way out. When his marriage began to fall apart, he didn’t even try to save it. But, after two years of separation, the things with his wife Emma are worse than ever and Luca is now risking losing his children. The shipwreck of his marriage, the growing dissatisfaction with his job and the fact that Oliver unexpectedly injures himself at the height of his career push Luca to the brink. Everything he tries to do to work things out falls irremediably in a whirl of mistakes and troubles that even make him risk going to prison. He suddenly finds himself on the margins of society in a ruthless and cold Milan, a city “too intelligent and full of itself to admit that men, sometimes, can’t make it alone”. Eventually, he will realise that he has to account for the many wrong choices he has made throughout his life and embrace sacrifice and humility, as cycling teaches, to get his life back on track.

Fresh, smart and compelling, La primavera perfetta is the story of one man’s journey of self-discovery, a witty exploration of maturity, brotherhood, love and life that captures the loneliness and childishness of adult life and the bitterness of mid-life crisis with such precision and verve that you’ll find yourself nodding and smiling, aching with pleasure and pain at once.

An engaging and very easy to read novel, and yet more profound than meets the eyes, with multiple levels of reading and an intense and challenging sibling relationship at its core.