The Path of Confetti 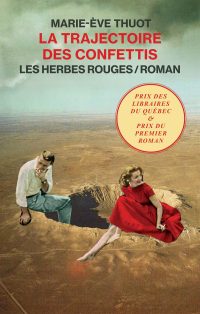 The Path of Confetti

“Constant food for thought, inviting us to reconsider the temples of our institutions and our habit of making our morals sacred.” — Yannick Marcoux, Le Devoir

“To summarize, you need to picture a sort of hybrid between Cloud Atlas by David Mitchell and a feminine and feminist Michel Houellebecq. Only then you will have an idea of one of our absolute favorites novels of this rentrée littéraire. We love this book!” —  Lire Magazine

A captivating canvas covering several generations of men and women who played the lottery of love and desire and wound up with vastly different urges, to put it mildly. In this novel, written from multiple points of view, the end of the world and feminism come together to put the quirks and miracles of the present day under the microscope.

2015: a bartender sworn to celibacy is, much to his dismay, attracted to a client whose name goes from Oscara to Fanny to Cleopatra. 1999: as candy rains down out of a piñata, a teenager falls in love with his aunt. 1899: in the northern United States, in a secluded town, a pastor reads racy bible passages. 2027: three young women secretly make fun of the spiritual leader of their community of extinctionists.

Something is not right…something never has been right about their relationships with sex, love and procreation. Generations of people controlled by societal norms, each put the limits of decency to the test. Yet the line between what is acceptable and what is not is not always as clear as it seems…kind of like the line between truth and lies…

Over the course of several generations, one unusual family explores the norms of their day and age, attempts to transgress them and suffers from the ensuing violence. One clear message arises majestically from this debut novel: no taboos!