The Madman of the Mountain 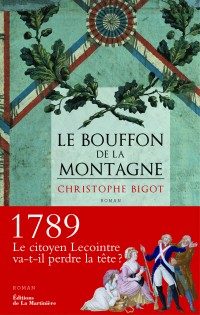 The Madman of the Mountain

Depicting him by turns suicidal and elated, unable to satisfy a heart that swung “between the Jacobins and the Cordeliers, the Convention and the Commune, the benches of the national representation and the streets of the faubourgs”, Bigot brilliantly and humorously recounts the trials and tribulations of a madman during the Revolution. – L’Obs

Thank you for rescuing this atypical, thermidorian Lecointre from obscurity. All is fair in this nuanced biography. –Jean Tulard

A jubilatory and precise style: a success! –Galignani Bookshop, Paris

Has Citizen Lecointre lost his head? Even though he is lucky enough to still have it attached to his body, having avoided the guillotine by dint of betrayals, renouncement and cowardice.

Has Citizen Lecointre lost his head? At age 47, this family man and prosperous tradesman – a fabric supplier to the Court, has everything a man could ask for. But as his daughter’s wedding draws near, the French Revolution breaks out. And in the blink of an eye, our man decides to enter the volcano.

Patriotic to the point of madness, a puppet of Mirabeau and Marat, persecutor of Berthier and Beaumarchais, Lecointre has become obsessed with just one thing: public affairs. From his assignment to lead the National Guard in Versailles to his election to the Legislative Assembly, this sworn enemy of royalty turns into a domestic tyrant and a public accuser. Playing with the guillotine the way others play with fire, his fiery temper is on display in the darkest hours of that period: from the terrible days in Versailles in October, 1789 to Robespierre’s fall, five years later, via Marie-Antoinette’s trial, where Lecointre is the prosecution’s key witness.

Le Bouffon de la Montagne retraces the exceptional itinerary of this enigmatic, colorful and appealing character. From the excitable benches of the Convention to the misty shores of the Cotentin, where he is sent on a mission; from the prison of Mont Saint Michel to exile in the countryside, Lecointre’s farcically epic tale includes a dazzling array of authentic adventures. This swashbuckler includes reflections on the comical side of one of the most tragic periods in French history.