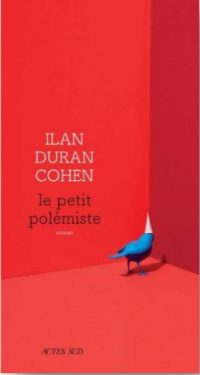 Is Ilan Duran Cohen the French Philip Roth? With Le Petit Polémiste, Ilan Duran Cohen definitely wanted to create a sci-fi delirium in 2030. Failed: this is a great naturalist novel about France in 2020.— LE FIGARO MAGAZINE

Lucid chronicle, sharp but always nuanced of the drift of humanist ideals. Freedom does not mean futility. Le Petit Polémiste is light, but he knows how to scratch where it hurts. — TRANSFUGE

Both a tragicomic farce and a plea for civil disobedience, Le Petit Polémiste is a novel that is probably right. — LIRE

So let’s give credits to Ilan Duran Cohen’s audacity, who doesn’t go in for half measures. In Le Petit Polémiste, he imagines the France in the early 2030s, and takes your breath away. Caustic, squeaky.— LE NOUVEAU MAGAZINE LITTÉRAIRE

Everything is going pretty well for Alain Conlang, a benign television pundit duly sanctioned by the state and extremely popular among younger viewers, until one evening during a dull dinner he comes out with a dumb and gratuitous sexist remark. Boredom? Too much to drink? Bad taste? No excuse will do. In a world that has been ideologically sanitized, Alain Conlang’s comments go down very badly and the well-oiled machinery of informing on one’s fellow citizens cranks into action.

Conlang ends up having to answer for his inappropriate ‘humor’ in court. Under intense scrutiny by those who would assess his level of social compliance, Conlang goes on the run standing still in an absurd race against the deterioration of his situation, flanked by a family itself undergoing upheaval (his brother is transitioning), a female lawyer well above regulation weight, a somewhat emotionally illiterate intern and a niece in distress…