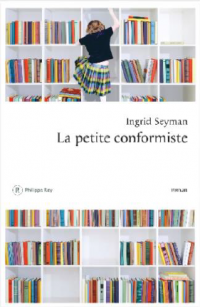 Esther is a right-wing child, born by accident in a left-wing family in the mid-seventies. In her family, everybody walks around naked. And everybody – except for her – is eccentric.

Her mother is an anti-capitalist secretary who swears only by May 1968. Her father, a Jewish Frenchman born in Algeria, wards off his fear of a new Holocaust by writing and reciting to do-lists. In Esther’s family, there is also a hyperactive brother and grandparents who cure their nostalgia for Algeria by playing roulette for chickpeas they will use in the couscous. But there is also an undertone of violence, established by the father, whose worrying compulsions poison the household.

The young girl’s life will change drastically when her parents, full of contradictions, decide to send her to enemy territory by enrolling her in a catholic school  located in Marseille’s most bourgeois neighborhood.

The Little Conformist is a gripping novel, in which language serves as a machine gun. It challenges our view of normalcy, and settles a score with love that hurts. It is both funny and serious, absurd and upsetting. The novel ends with a start that makes the family appear in a new light — and that makes the reader question everything.
Ingrid Seyman lives in Montreuil. She is a journalist and a film director. The Little Conformist is her first novel.