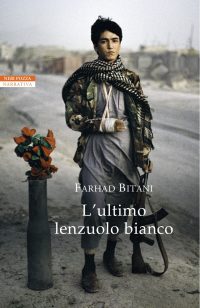 “There are people who write books because it’s their job to write books. It’s not like that for me. I’m not a writer. I’m a soldier and my father is an Afghan General”

So begin the shocking revelations of Farhad Bitani, born in Kabul in 1986, the son of a Mujahideen General and a soldier himself. L’ultimo lenzuolo bianco is an autobiographical account, shedding a bright, new light on the complex and unfamiliar Afghan universe. Bitani has lived through Afghanistan’s recent history: from the Mujahideen government to the Taliban, to today’s veiled democracy. As the son of a general who fought against the Soviets, he enjoyed the privileges of power, but when his father fell into disgrace under the Taliban, he also experienced poverty, forced indoctrination to Islam, and exile. A soldier himself, Bitani reached the rank of captain in the Afghan army, after studying in Italy, at the Military Academy in Modena.

Farhad Bitani gives a vivid and profoundly honest account of the dark side of Afghanistan – civil war, gratuitous violence, abuses of power and abuse of the Islamic religion as a political instrument – in this fierce, unsettling and tragic autobiography, brightened by flashes of sweetness and  heartrending humanity.

What does it mean to be born and raised and become an adult in Afghanistan? Farhad Bitani found the courage to write an intense and visceral memoir that chooses truth over discretion, and has earned him a death sentence. Following an attack that risked his life, he decided to “put down his weapons and pick up a pen”, and, once he was safely back in Italy, to tell his own story.

Because of this, in 2012 Farhad Bitani became the subject of a fatwa, a death warrant issued by religious leaders in the Islamic world.