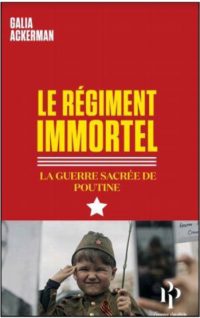 Galia Ackerman, uncontested expert on Russia, has penned the first book to take Putin’s rehabilitation of Sovietism head-on. This weighty and polemical work sheds new light on Russia and its ambitions.

Every year on May 9th, Russia celebrates its victory of the “Great Patriotic War”, the Second World War. Parades dubbed “Immortal Regiments” are organized throughout the nation and the world, with booming popularity. But why the sudden surge of enthusiasm, when the War finished over 70 years ago? At the USSR’s demise, Russia became an impoverished and unpopular regional power. Putin’s stroke of genius has been to restore the Russian people’s pride in their Soviet past while progressively obscuring its darker sides. And what moment of Soviet history was more glorious than victory over the Nazis?

With this sleight of hand, the Russian people, having “won the war against absolute evil”, have become the emblem-bearers of absolute good, and Stalin a strangely popular figure. With the nation’s conscience thus abluted, it has not been hard for the government, flanked by an army of journalists and “political technology”, to convince the masses that its actions at home and on the international stage – political assassinations, aggression towards Ukraine and Georgia, the abolition of free speech and public assembly – are legitimate. The Immortal Regime is, after all, duty-bound to protect the Motherland and vanquish its foes.

Born in Russia, Galia Ackerman has resided in France since 1984. A Doctor of History and Associate Researcher at the University of Caen, she specializes in Ukraine and the ideology of post-Soviet Russia. Her journalism has been featured by RFI and the Politique Internationale review, and she is, most notably, the author of Premier Parallèle Editions’ Traverser Tchernobyl (2016).