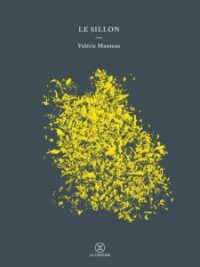 “The writing is direct and sincere and it immediately had me hooked. I love how she portrays Turkey, she describes what could happen in France tomorrow.” — Virginie Despentes

“Inside Le Sillon dwells a frantic, violent and menacing world ; a world that is nevertheless very much alive. Its story approaches the collective experience in the best possible way : through the intimate everyday life of the individual.” — Annie Ernaux

“I was delighted [to read the book], even if the theme is serious. An outlook, a style and a generosity that brought out emotions in me that I hadn’t felt before.”  — Dany Laferrière

“Her honesty brings Emmanuel Carrère to mind, the use of “me” that becomes all the more delicate and painful since this “me” is stripped naked, revealing all of its imperfections and defaults. It is a novel about a failure, but nothing is more beautiful than the stories that end badly because their themes surpass them.”  — Yann Perrreau, Les Inrocks

“Valérie Manteau combines an autobiographical love story and an investigation into Hrant Drink, the Armenian journalist who was assassinated in 2007.” — Alexandra Schwartzbrod, Libération

Valerie Manteau’s second novel has remarkable depth. In a masterful depiction of the unknown, a love story dotted with impossibilities commingles with a world on the verge of the abyss and with the life of a murdered journalist.

A young woman meets up with her lover in Istanbul. While the city is slowly decaying amidst its contradictions and the violence of the regime, some are still fighting for their freedom. As she wanders around, this woman discovers the story of Hrant Dink, an Armenian journalist murdered in Turkey because of his aspiration for peace.

Valérie Manteau was born in 1985. Publisher and columnist, she was part of Charlie Hebdo’s team from 2008 to 2013. She now lives between Marseille, Paris and  Istanbul. After Calm and Peaceful (Le Tripode, 2016), The Groove is her second novel.

“The title of Hrant Dink’s journal was The Groove. He probably had in mind the parable of the sower. Seeds that fall on the side of a path or on rocks are lost, but those that fell on good soil grew into fruits: one gave a hundred, another one gave sixty and the last one thirty. This is Agos, the ground on which something could grow rather than nothing.” — Excerpt from Valérie Manteau’s The Groove