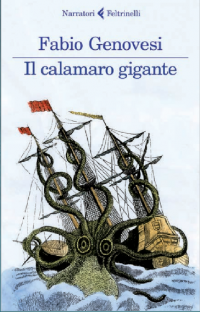 One of the best-loved storytellers of recent years. Winner of various literary prizes including the Strega Giovani.

A journey off the beaten track and the charted routes, over land and – most of all – sea, chasing dreams, passions and stories, for ultimately stories are what we are made of.

We know next to nothing about the sea, but we trick ourselves into believing the opposite: we spend a day at the beach and we think we’re looking at the sea; in actual fact, all we see is “its coat, its salty, shimmering skin.” Perhaps this is because just below the surface, and from there down to its deepest depths, there is such an incredible and different kind of life from our own that it cannot but seem absurd, impossible to our eyes. Just as for centuries, the mere existence of the giant squid seemed impossible to us: that sea monster that has inspired the most diverse range of explorers to search for it. One of them was the priest Francesco Negri, who in 1663, at the age of forty, set off from Ravenna heading for the unknown reaches of Scandinavia, becoming the first traveler to reach the North Pole. Or Captain Bouyer dell’Alecton (the inspiration for Jules Verne’s Twenty Thousand Leagues Under the Sea), who while sailing towards Guyana noticed something remarkable on the horizon: this is the first testimony of the giant squid, of its huge, intelligent arms, of its tentacles wrapped around the ship like so many terrible sea snakes.

But nobody would believe him. Indeed, there are precious few scientists willing to listen to the words of seafarers –mariners, fishermen, natives, etc. – largely passing them off as no more than sailors’ yarns or collective hallucinations: what they saw contradicted what the scientists had written about, and so they simply couldn’t have seen it.

Fabio Genovesi tells the true story of this impossible beast, of the giant squid and those who set off in search of it, despite everything, along with a thousand other stories which stretch like tentacles from the heart of the ocean to our own doorstep. After all, let us remember that we live on a planet which is still home to dinosaurs, like the coelacanth, or animals such as scorpions that have remained unchanged in their perfection for four hundred million years, thus inviting us to believe in the unbelievable, and pursue our dreams all the way to the unexplored territories. And he does so by bringing together the lives of these extravagant explorers and unconventional scientists – including the pioneer Mary Anning, “she who single-handedly altered the very history of Earth,” and her little dog Tray – with the personal tale of his own grandmother Giuseppina, who spoke to her dead husband at dinner for years, of his classmate from middle school who one day stopped walking altogether so as not to tread on the ants, of the little girl who was born thanks to a missed date in an ice-cream parlor.

What emerges is a planet that would seem to be one of great madness, but if we stop exploiting it and poisoning it, if we stop considering ourselves a step above the rest and understand that we are intrinsic to nature, that’s where we also become an integral part of this clamorous, boundless prodigy, while through these pages, we set sail on the surprising, amusing and touching discovery of the wonders of the world, and thus of ourselves.