The Garden of Monsters 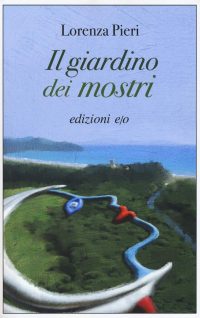 The Garden of Monsters

“Pieri adds to a robust tradition in modern Italian literature, popularized by authors like Elsa Morante in Arturo’s Island, Italo Calvino in The Path to the Spiders’ Nest, and Elena Ferrante in the Neapolitan Quartet: the novel of adolescent disenchantment, in which charmed and secret places are crucibles from which more hardened lives emerge.” — Literary Hub

“After the success of Lesser Isles, Lorenza Pieri returns with a new novel, The Garden of Monsters. A book whose impeccable narrative pace brings us inside a family epic in which love and conflicts result into a delicate and articulated mosaic of human revolutions.” — Corriere della sera

“It’s the Tarot Garden in Capalbio, Tuscany, the way out of sex, dirty business and drugs. In Maremma you meet cowboys, artists, sophisticated families and crooks, a social and cultural clash masterfully depicted by Lorenza Pieri, a unique way to look into Italy’s eighties and nineties history.” — La Stampa

“The Garden of Monsters is a fairy tale place whose allegory creatures – huge statues representing the tarot deck’s Major Arcana cards – become a way, the only way, to make sense of reality. The Maremma, in Tuscany, is where Lorenza Pieri sets her incredibly poignant novel and by telling the tormented story of a single family unveils the changes of a whole society.” —D, la Repubblica

“And that’s where the narrative threads intertwine: all-consuming passions between different social classes, new loves and misunderstandings, women trying to emerge. And tarots that, while leading the plot, become wise masters able to unveil our real nature through words that can hurt but can also create and heal.” — Vanity Fair Italy

“There’s above all a very robust writing that smoothly builds up a family epic stripped of sappy details but full of a continuum of sardonic compassion.” — Il Venerdì di Repubblica

A complex and appealing novel, somewhere between a rural epic, a Bildungsroman and an artist’s biography.

The setting is between 1987 and 1990 in a town in Maremma, Tuscany, too famous to be named. The stories of two families – local horse breeders, the Biaginis, and the bourgeois Roman Sanfilippis – interweave, whilst the place they meet becomes the perfect stage for portraying the events taking place in Italy. And so the friendship between Sauro, an ambitious cowboy, and Filippo, a hedonist politician, who have also become business partners, will cause the other members of their families to form links or clash with one another. In the town, which at first sight displays a heady abundance of money and high spirits, political beliefs, family relationships, moral uprightness, sexual identity seem to be losing shape.

Sauro and Filippo and their wives, Miriam and Giulia, are prototypes of a fragile humanity, apparently magnanimous but mostly mean-spirited. In the midst of them the fragile Annamaria, fifteen years old with a whole lot of complexes, struggles to find her place. In particular with respect to the bright and beautiful Lisa. But a parallel world is taking shape. It’s the Tarot Garden of the FrancoAmerican artist Niki de Saint Phalle. A magic place Annamaria will gradually draw close to and where, thanks to the artist’s stories and memories, she will learn many of those life lessons that no-one in her family has ever been able or inclined to teach her. A complex and appealing novel, somewhere between a rural epic, a Bildungsroman and an artist’s biography. The unique clash between two social classes and two distant worlds forms the travail out of which a new country will be born.

Lorenza Pieri (1973) spent her childhood on the Isola del Giglio. She studied in Siena and Paris. She has worked in publishing for fifteen years (Einaudi, minimum fax). One of her short stories appeared in the anthology Roma Capoccia (Deriveapprodi, 2005) and she has published a memoir, Molto grossa, incredibilmente vicina. Un anno con la Concordia sotto le finestre, (doppiozero, 2013). She is also a literary translator (Einaudi, Marsilio, minimum fax, Ponte alle Grazie). After living and working in Rome for twelve years she has temporarily moved to the United States with her husband and two children. Her first novel Lesser Isles was published in 2016.