The Book of The Seven Seals 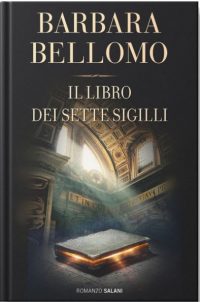 The Book of The Seven Seals

The word ‘secret’ in the name comes from the Latin ‘secretum’, which is closer to ‘private’; yet the truth remain off-limits.

Margherita Mori is a writer who, unbeknown to anyone else, suffers from hypermnesia, a condition which causes her to remember every single detail of her existence, even the most painful, as vividly as its first occurrence. It is a pathology that seems to isolate her from the world and from sentimental relationships.

A few days previously, the author has published an adventure story narrating a book of the apocalypse written by the prophetess Anna and protected by seven seals. And, as in the Apocalypse of Saint John, on the opening of each seal, a terrible curse plagues the population, historically documented in the Jewish-Roman wars…

After the book’s publication, the writer is contacted by Father Costarelli, a Jesuit teacher at the Seminario Apostolico Maggiore in Rome. During their meeting, the priest warns her of the danger threatening her because of what she has written and leaves her some clues that will prove to be essential for unravelling the deep mystery in which her novel seems to be involved.

Two days after their meeting, Costarelli dies in suspicious circumstances. Erika Cipriani, a lieutenant of the ROS, the special forces of the Italian  police, is made responsible for the investigations. The woman will later b joined by Captain Landi of the Unit responsible for cultural heritage. There are many questions to be answered: does the book of the seven seals that Margherita Mori writes about in her novel really exist? Where can it be hidden? What role do the Jesuits play in the search for the book? Who is it that has been searching for it for centuries? And why were the Nazis on its trail, as well?

All around Margherita, chases, kidnap attempts and other deaths follow one upon the other and, in her flight to safety and to discover the hard truth hidden behind her novel, she will travel the streets of Rome, entering the Capital’s most beautiful churches, finding her way into the Vatican archives and then departing for Venice.

The writer will find out not only where the book of the seven seals has ended up, but also that many Jesuits have died over the course of the centuries in order to protect it and that several exceptionally educated women of undoubted courage, such as Elena Cornaro – the first ever graduated woman in the world – and Catherine of Russia, have risked their lives to save it.

Is it possible that her own turn has now come?