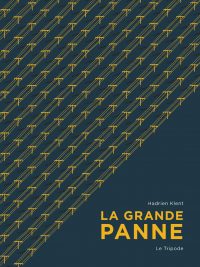 The author has served up a novel which, funny as it may sound, is reminiscent of a TV series with its short chapters, incisive dialogue and colourful characters. And I say funny because there really is a lot of amusement on offer here, which will do us all the world of good in these challenging times. – Le Progrès

Following on from his Et qu’advienne le chaos, which was also a sci-fi book, Hadrien Klent (in itself a mysterious pen name) paints a very convincing picture of how states actually function, forever verging on pure farce. – Yann Plougastel – M – the magazine supplement of Le Monde

La Grande panne is a highly engaging political tale which, beneath its light-hearted surface, contains disturbing echoes of very contemporary concerns. With themes ranging from political activism to the management of natural disasters, the protagonists each come under the spotlight in their turn and are all found to be largely wanting… This is a funny and often moving novel which, in examining how people deal with the burden of responsibility, ultimately offers revealing insights into human nature itself.

Was it an accident or sabotage? An explosion in an Italian graphite mine gives rise to a huge cloud in the atmosphere which is in danger of igniting if it comes into contact with overhead power lines. In order to avoid disaster, a general power cut is decreed throughout Italy, plunging the country into chaos.

The cloud starts to move northwards and France decides in turn to cut the power to its own network. The government relocates to the island of Sein in Brittany to oversee the coming blackout. Beginning like a disaster film as it follows the daily operations of a crisis response unit, La Grande Panne gradually branches off in unexpected directions, combining love affairs with the corridors of the power, betrayals of friendship, threats of attack, police surveillance and the down-to-earth realities of life being put on hold until such time as things return to normal.

We encounter a revolutionary who dreams of fomenting a civil insurrection, advisers striving to contain the mood swings of a disillusioned French president, an author with writer’s block who witnesses his island becoming the hysterical epicentre of a country in shock, a second-hand goods dealer who finds himself press-ganged into the secret services of a foreign power and a rancorous journalist who paints a portrait of a France which has lost its moorings. La Grande Panne is a depiction of individuals who are somewhat at sea and yet whose humanity ultimately proves to be stronger than the state violence being perpetrated around the world.