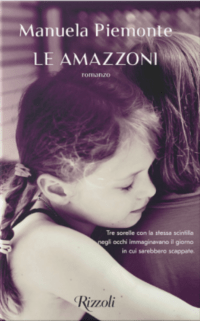 A novel that tells a story long-forgotten : The Amazons. This debut, by author Manuela Piemonte, puts back together the pieces of the odyssey of Italian migrants in Lybia through the story of three sisters, Sara, Angela and Margherita, born in a small Lybian village and forced to grow up a in a fascist boarding camp in Marina di Massa, on the Tuscan coast. But the girls come from the desert and while theirselves are shaped by a daily litany of a future of motherhood and housekeeping, they keep hearing a countermelody : a scene seen right before they left picturing a fierce woman riding a horse. The untamed amazon that builds her own future. – ilVenerdì di Repubblica

Grace, sensibility, a powerful feminine story animated by various well depicted characters and a captivating narrative style, this is the book by Manuela Piemonte that sheds a light on a dark and forgotten part of Italian history in the years of Fascism and the Second World War. The author’s writing skilfully mixes fiction and reality focusing on three sisters, the main characters : Sara, nine years old, Angela, 7, and Margherita, the youngest, five years old. The girls, hand in hand, leave heir parents and Lybia for Italy, ending up alone in a boarding camp on the coast of Tuscany. Their home now is the FIAT tower, a basic and cold place where young women have to educate the young guests. But Sara and Angela share a secret and this secret makes them stronger than the others girls : few hours before leaving their homeland they saw a fierce Berber woman riding a horse, wild and free towards the horizon. Although a warrant arrest was issued for her, the sisters told nobody what they had seen that night. The girls will hang onto this memory of freedom using it to face what it now clearly looks like a prison that will keep them away from their parents for long years full of difficulties. Like an hidden but strong presence, the author tells a story that moves us deeply. Without rhetoric, through the pages we see the destiny of these young characters unfold, as they fight, along with others, to keep their hopes alive against a system that wants them brainwashed. Piemonte dwells on interrupted childhood, frustration, loneliness, sense of abandonment. She watches their characters as they grow older always supported by their “sisterhood”. Not only despair then, but also hope told through the braveness and the strength of the main characters and by all the women that, along their path, will manage to somehow support them and save them. — ANSA

The story of Sara, Angela and Margherita helps us mending our memory, it’s a bridge to our yesterday, it’s a photo found by chance in an old suitcase that changes everything we know about our family. The story got us from the very first pages, we wanted to know more about the destiny of the three girls to find out what was expecting them in their life at the colony. Not only the idea but the writing and the characters, too are magnetic. It’s a compelling novel that leaves its mark, and we can easily say that this is what we have been looking for in the last few months. Her novel granted us the pleasure of pure engagement, a mix of Italian historical events and vivid, strong female characters – and this is something not to take for granted in times when so many books talk about empowerment without sounding too convincing. — Michele Rossi, Rizzoli

Reading your novel was a real eye-opener. I didn’t know about this historic event that has deeply affected thousands and thousands of families. Not only I feel this is a part of history that needs to be told but it is written with a poetry, a poignancy and a strength that is beautifully embodied by the Amazon. The Amazons is at once very intimate and universal and it will resonate in many readers. Sara, Angela and Margherita will forever live beside me. These three sisters and all the Amazons – who are truly inspiring figures – shall become outstanding characters in modern fiction and the novel they evolve in is a compelling work on memory and hope. It is one that doesn’t cross an editor’s path very often and the whole team at Editions Robert Laffont would be honoured to bring it to French readers. — Katel Le Fur, Editions Robert Laffont

I was so glad to be able to read such an extensive English sample after I already fell for the pitch. I immediately felt the suffocating, iron grip on the girls, innocent as they were, from the moment they step on the ship and getting even worse while imprisoned in their ‘holiday camps’. Alternating this with the peaceful and loving time the girls had back home with their parents, which they were only too fond on bickering about… I had no idea of this dark page, and it’s a side of the war that not many people are aware of, which makes this on the one hand a necessary addition to the war literature and at the same time a contemporary book touching on the issue of Libyan immigrants into Europe. The voices of the children in this warzone made me think of the beautiful, but harrowing film La vita è bella with the girls trying to make sense of the unimaginable. Added to this, I truly liked the image of the Amazon which empowers the girls who become true amazons themselves, giving the novel a magical element, so familiar to the South-American literary tradition that it also brought Coelho and Allende to mind; authors that I hold high. […] We feel that Manuela Piemonte with The Amazons would make a perfect addition to the Ambo|Anthos list where she would be surrounded by authors such as Tatiana de Rosnay and Martha Hall Kelly. — Renate Liesker, Ambo|Anthos

AMAZZONI is the fruit of long research by the author on a largely unknown page of Italian history.

In 1940, 13,000 children of colonized Libyans were brought to Italy on Mussolini’s orders, “invited” by him to spend a holiday in their home country – a holiday that was to turn immediately into something very different: the outbreak of war came simultaneously with the children’s arrival in Italy and kept them there well beyond the time established.

In Italian-ruled Libya it’s night-time, there’s a full moon and Sara and Angela, aged nineand seven, see a woman on horseback, magical and majestic as a queen, racingthrough the desert. They call her simply the Amazon. It is an image that holds themspellbound and accompanies them on the day when, a little later on, they are obliged togo away, leaving behind them their village colony, together with their younger sisterMargherita, who is five. A summer in a holiday camp awaits them – three months to getto know Italy and the discipline of the Fascist summer holiday camps.

They are not alone: the order is to bring to Italy the thirteen thousand children of thecolonized Libyans aged between four and fifteen. Only one day after they disembark, onarriving at Torre Balilla in Marina di Massa, Mussolini declares war: it is the 10th June1940. The brief summer holiday thus turns into a long war holiday, which is to last sevenyears, until after the end of the Second World War. Three Libyan sisters and a childhoodbroken by waiting, by the desire to return and the attempts to escape. Sara, Angela andMargherita are obliged to grow up obeying the dictates of discipline and propaganda, ina world where there are no longer parents, where their only guide to freedom is thedream of a woman on horseback in the desert and their meeting with a variety of femalecharacters who, in their own ways, are also Amazons.

This is a novel we have loved from the first few lines in which we see the children falling into the orderly rows of the choreography dictated by the regime.

“Once I had superimposed this imaginary world of mine onto the real events, I could no longer distance myself: I had to evoke it in black and white. Taking three little girls, placing them face to face with a figure embodying the Amazon and accompanying them through a piece of History.” – the Author