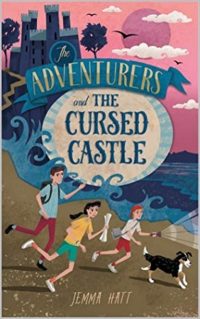 THE ADVENTURERS AND THE CURSED CASTLE (Book 1, January 2019)

‘I’m so glad I gave in to my inner child and accepted this book. It was SO MUCH FUN. I loved the characters – Lara, Rufus and Tom are close enough in age to share interests and have fun together, but each have very distinct personalities. There is just enough mystery and adventure to keep the story moving along at the perfect pace. This is the type of book I would have devoured as a child – characters that I would want to be friends with, a cool setting, a mystery, adventure and lots fun. Even though it was a story for children, adults reading along with their little ones will not be bored.’ –bookfrolic.com

Young Lara’s mum, an Egyptologist, has to travel to Egypt over the Summer holidays while Lara’s grandparents are on a cruise, so Lara, her dog Barney and her cousin Rufus are sent to Cornwall, where their great-uncle Herb, who they’ve never met before, lives in a castle partly fallen into disrepair and said to have a curse haunting the family for generations after their ancestor, 19th-century explorer Captain Jack Kexley, brought Egyptian artefacts home with him that he shouldn’t have taken…

Lara and Rufus soon discover Herb’s eccentric ways and make a new friend, local boy Tom, whose parents work for their great-uncle. As soon as they learn that there might be a treasure hidden somewhere in the castle, that Herb has been long searching for, Laura, Rufus and Tom (accompanied by the faithful Barney) decide to investigate the clues left by Jack Kexley – but they are not alone. Two suspicious characters, who introduce themselves as historians from the British Museum, suddenly show up at Herb’s castle, and it soon becomes apparent that they’re after the treasure and will stop at nothing to get their hands on it.

Can the four young adventurers reveal the secrets that have been hidden for over a hundred years and find the hidden treasure before the unwelcome visitors?

THE ADVENTURERS AND THE TEMPLE OF TREASURE (Book 2, June 2019)

A father’s legacy, a chase across Egypt and a mystery buried for thousands of years…

… Lara, Rufus, Tom and Barney are back, in their second exciting adventure together. With the help of friends old and new, can they navigate their way through the ancient wonders of Egypt to unearth one of the greatest treasure troves in history?

THE ADVENTURERS AND THE CITY OF SECRETS (Book 3, April 2020)

Two master criminals are on the run with ancient treasure, using London’s web of hidden trails and passages to conceal their loot. The Adventurers must track them down using their wits, Uncle Logan… and a stolen red bus.

Join Lara, Rufus, Tom, Daisy and Barney as they race to uncover the City of Secrets!

THE ADVENTURERS AND THE CONTINENTAL CHASE (Book 4, November 2020)

A kidnap in Paris… A chase across Europe… One epic road trip!

The Adventurers are on holiday when Maye warns of suspicious activity in Paris. Join them as they race from the French Alps to the ancient ruins of Rome on the trail of a dangerous gang with a legacy of secrets.

THE ADVENTURERS AND THE JUNGLE OF JEOPARDY (Book 5, August 2021)

A TV show has turned into a dangerous game… can six young challengers succeed against the odds?
Join Lara, Rufus and the gang on their most perilous adventure yet. Travelling across the Costa Rican rainforest, they must stay ahead of menacing TV executives and elite adventuring teams from around the world. The race is on to discover Teo’s treasure, but the jungle has obstacles to overcome.