Tell Me It Can’t End 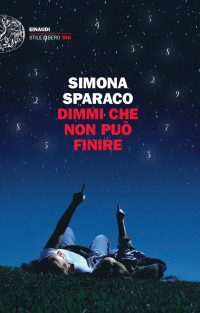 Tell Me It Can’t End

“A book that seems to be written to warm your heart on cold winter days glued to its pages, wrapped in a cover over your legs and a beautiful story in your hands.”- La Stampa

“This novel moves and cheers you up. Simona Sparaco gives us vibrant pages and makes us dream up to the last line. “Tell Me It Can’t End”, is a transversal novel that embraces the wide public and enchants every reader.” – Vanity Fair

“Built wit skill and grace, the new novel by Simona Sparaco forces the reader to look at himself in the mirror and to question his ability to face the challenges that life throws at him.” – la Repubblica

“Tell Me It Can’t End” is not simply a love story. Amanda is a deep and complex character, that “superpower” she is convinced to have is actually a defense against pain.” – Corriere della sera

“In a skilful plot, which reveals a long experience as a screenwriter by this author already finalist at the Strega Prize and winner of the DeaPlaneta Prize, Simona Sparaco accompanies the reader in an enthralling confrontation between cynicism and empathy.” – Il Giornale di Vicenza

“A story of courage, growth, evolution that teaches us to overcome our fears. A wonderfully written book from the first to the last word, which touches the innermost chords of the human soul.” – Taranto sera

What would you do if you knew the exact end date of everything that happens to you? Would you live it anyway, accompanied by that pressing fear of losing it, or would you avoid it in order not to suffer?

Amanda lives in Rome, at home with her mum. She is thirty, has no boyfriend, a job she hates and no friends except for a would-be showgirl and a neighbor who is also her psychotherapist. Ever since she was little, Amanda has believed she could foresee the day when everything in her life would end. It all started with her passion for maths and numerology. For example, she adds up the date of birth of anyone she meets to reveal their personality, and since she has this affinity with numbers, she’s convinced that every time something good happens to her, the numbers will give her its end date. When she finds out the date her job is destined to come to an end, she decides to stay one step ahead and quit. Amanda has constructed this kind of defence mechanism and learned to face the world with a sneer, somewhere between bitterness, resignation and self-deprecation: she hides behind this unusual superstition to cover some deep scars.

Now unemployed, she takes a job babysitting little Samuele, even though she hates kids. This role with zero job satisfaction could work out well for her, while she waits, as always, for the inevitable end. Samuele is a lot like her, even though he’s only seven: a bit detached and a real loner. He has trouble making friends but has a keen observational eye. Because of, or thanks to, her relationship with Samuele, and his dad Davide, Amanda is forced to deal with family (hers and theirs) and to realise that even the most messed up life can be accepted, it just takes a lot of love and hard work. Just when things seem to be going right, the numbers throw a new end date her way, that end date, the most important of all… What will she do?!

Simona Sparaco brings us a work of women’s fiction with an unforgettable protagonist. Amanda is a woman of no particular talents; attractive, but not too much; lacking inhibitions, but not morals; shy but blunt; far from the average, deceiving female leads in the countless tv series that have portrayed a generation of lost women trying to find their place in society. Amanda is unique, she lays her cards on the table and spits out the truth with disarming courage, opening up to the reader with no shame, and sharing all her fears and foibles (and a few surprisingly tender moments along the way)